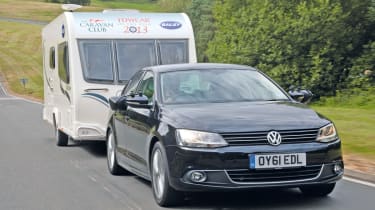 A first past the post scoring system made picking an overall Tow Car of the Year easier than ever.

Over three days, each judge used the 23 entrants to tow a variety of caravans nearly 700 miles on two challenging courses. Of course, they also rated each car’s ‘caravanability’, assessing how much luggage they could take and how easily it could be loaded. And the VW Jetta successfully defended its crown.

It scored with its crisp handling and superb ride, plus its impeccable road manners when towing. The DSG box shifted smoothly and on motorways the car’s stability was second to none.

VW offers three trims and a choice of petrol and diesel engines. But this 2.0 TDI is best for towing, preferably with the DSG twin-clutch box.

But there’s more to the Jetta than classy looks and capable dynamics. The boot has a huge 510-litre capacity, while top-spec Sport models get a hill-hold function, semi-auto air-con, cruise control and an iPod connection.