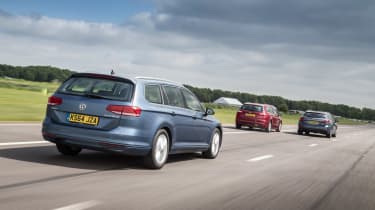 The family estate car class has taken a bit of a beating in the past few years. Buyers have been turning away from these practical models in favour of crossovers, people carriers and SUVs, and the latest generation of large estates needs something special to stand out in the crowded new car market.

Take the new Volkswagen Passat Estate. It offers the same versatile load area as before, but VW has given the family five-door an upmarket makeover that attempts to add a bit of compact executive appeal. Does this provide it with an edge? To find out, we’ve lined it up against its closest competitors.

The Mazda 6 Tourer has benefited from the same makeover as its saloon sibling, while its sharp chassis means it’s the driver’s choice in the class. That accolade used to go to the Ford Mondeo, but the latest model, launched late last year, has sacrificed sporty handling for a more comfortable drive. But does it have the upmarket appeal to be an attractive buy?

We’ve lined up 148bhp diesel auto versions of our cars to see which is best, with enough practicality to stand out.

Click on the links above to read each in-depth review, and then read on for our verdict. 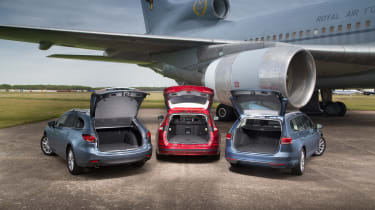 The Passat has the biggest boot here, but the Mondeo offers the largest floor area, at 113cm2. There’s less space under the load cover, though. The Ford has a flush load lip, yet the small lips on its rivals will stop items from falling out, and aren’t hard to lift items over. The 6’s load cover is attached to the tailgate, so it never gets in the way.

All three models will make decent tow cars, with maximum towing weights ranging from 2,000kg for the Volkswagen to 1,600kg for the Mazda. VW and Ford offer retractable tow bars for £875 (below) and £750 respectively, while Mazda has a fixed tow bar kit for £358. 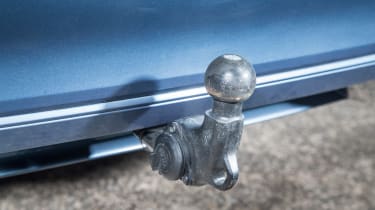 A 119g/km CO2 emissions figure puts the Passat in road tax Band C, saving you £80 a year over both rivals. Company car buyers also benefit, as the annual Benefit in Kind rate is cheaper, yet the VW commands the highest P11D value here. 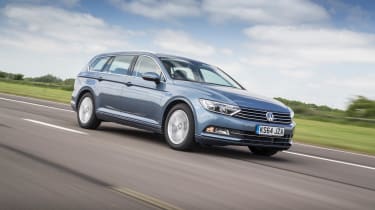 There’s no doubt about it: the new Passat Estate is one of the best family cars around. The vast boot is packed with user-friendly touches, and it’s backed up by a spacious interior that’s well built and has an upmarket feel. Add in a grown-up and involving driving experience, and it’s a clear winner for business users, while stronger residuals cancel out the price premium for private buyers. 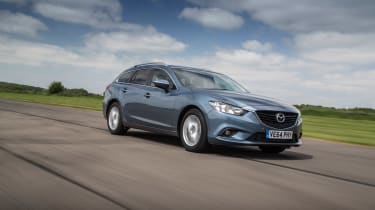 To come second to the Passat is no insult to the 6 Tourer’s ability. If you’re not ready to sacrifice driving fun when buying a family car, then it’s the perfect solution, as it delivers a great balance of sharp handling, space and comfort. The SE-L Nav model has an adequate amount of equipment, and a lowerlist price and decent running costs work in its favour, too. 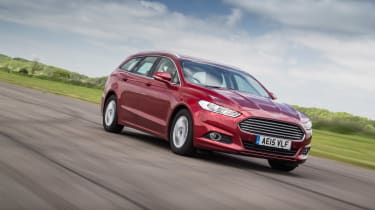 We really wanted the Mondeo to live up to its sharp looks, but again we’ve been left cold by Ford’s family car. In this company, the cabin feels cheap and the boot lacks any useful features, while the crisp handling of its predecessor is a distant memory. This wouldn’t be so bad if it delivered a comfortable ride, but the soft suspension is wallowy and unsettled. 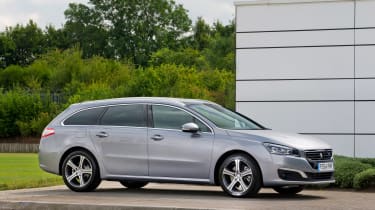 The updated Peugeot 508 SW also aims to add some executive luxury to the family car class, and the facelift should have ironed out the electrical gremlins that plagued its predecessor. Auto model is well equipped, but Band F tax is expensive. 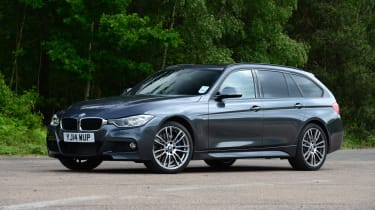 Rather than get a family car with executive aspirations, why not go the whole hog and buy an exec? We found a one-year-old ex-demo BMW 320d auto in M Sport guise, which will deliver entertaining handling and good economy in equal measure.