A strange thing is happening to the supermini market... Conventional hatchbacks are being turned into 'urban on-roaders'. 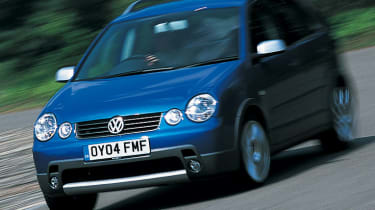 Giving the standard Polo a younger look and image was never going to be easy, but VW has added a dash of real flare. The alloys are stylish but spoil the ride, and a bit more thought could have gone into the cabin. Yet urban buyers who want a more exciting-looking Polo will love the Dune.

Do you remember Dr Martens'? In the mid-Nineties, the fashion craze that swept UK secondary schools was for lace-up workman's boots - the chunkier the better.

This particular fad is long gone, but now that all those steel-toe-capped teenagers have grown up into young car buyers, a strange thing is happening to the supermini market... Conventional hatchbacks are being turned into 'urban on-roaders'.

The idea is to take the rugged looks of an SUV and transpose them on to the compact, practical shape of a small five-door. First to come out of the woodwork was the Rover 25-based Streetwise, followed by the Citroen C3 XTR. Now, Auto Express has driven the next hatchback to be given the boot camp treatment - Volkswagen's Polo Dune.

It might sound like a plan with the potential to make a purist car enthusiast's skin crawl, but look at the newcomer and you should be pleasantly surprised. Many of the model's modifications have been made possible by a 20mm increase in ride height, allowing VW to fit 17-inch alloys, plus bold plastic sills and wheelarch extensions. Darkened tail-light lenses and larger bumpers with chrome-coloured inserts complement the silver roof rails and door mirrors to complete the look.

Inside, the makeover seems to lose its momentum as there are few signs that this is the fashion-conscious member of the Polo family. The only clue is the seat trim, which is labelled Fun - a badge that has been retained for European versions of this model.

The Streetwise and C3 XTR share one significant benefit over their standard stablemates - improved ride. With an increase in suspension travel, both smooth out undulations in the road far more effectively. But the Dune fails to deliver similar results due to its larger wheels and low-profile tyres.

On the road, the newcomer is every bit as competent as a standard Polo, giving sure-footed handling rather than hot hatch dynamics. Our test car came with VW's 1.4-litre three-cylinder diesel engine, but with only 74bhp on tap it felt wheezy and unrefined. The sprint from 0-62mph takes a noisy 14.7 seconds, although the real benefit is average fuel economy of 56.5mpg, which should keep running costs down.

However, most buyers will be better off going for the quieter and cheaper 1.4-litre petrol-powered variant. Choose the oil-burning Dune and you will pay £13,470, while the entry-level petrol car is £12,495. Included in the price tag is climate control, an electric glass sun-roof and a leather steering wheel. But as rival vehicles are much cheaper, it looks as though only the well heeled will be choosing the Volkswagen.