Influence of the latest Golf is clear as German baby grows up in style. 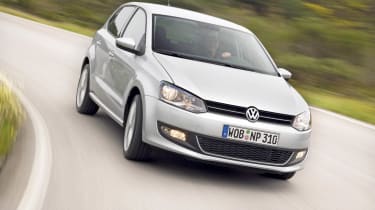 The Polo has been freshened up – and Auto Express can tell you whether it is a ‘hole’ lot better! British buyers love Volkswagen’s supermini – its blend of classy looks, reliability and quality has meant it’s consistently been one of the UK’s best-sellers.

But while the current version has proven popular, it’s been made to look rather old-fashioned next to Ford’s funky new Fiesta. Step forward the all-new Polo MkV, then, which boasts a raft of technology, a weight reduction of nearly eight per cent and a smart Golf-style look. So is it a Fiesta-beater?

Well, while not as head-turning as the Ford, the Polo is certainly one of the classiest small VWs ever built. It gets a neat horizontal grille and sleek headlight arrangement from the Golf and Scirocco, which is mixed with chunky tail-lights and clean surfaces.

And it’s much bigger than the old model, too. Measuring 36mm longer than before (taking the length to 3.95m) and 32mm wider with a 13mm lower roofline, the Polo has a very purposeful look. It’s also safe – VW predicts a maximum five-star Euro NCAP crash-test rating.

Inside, the cabin takes a leaf out of the Golf’s book and makes another leap forward in doing so, combining the latter’s high centre console with neat silver-rimmed dashboard dials and a host of aluminium highlights. The quality of soft-touch materials on top-spec models provides a premium-feel environment.

Options include an air-conditioned glovebox, MP3 connection point and a touchscreen sat-nav system.

There’s plenty of space, too – those increased dimensions create more room inside, while the boot is now slightly bigger at 280 litres with the rear seats in place, and 952 litres when they are folded flat.

In addition to the carry-over 59bhp and 69bhp 1.2-litre petrol units, there’s now a more powerful 84bhp 1.4 and a new 104bhp 1.2-litre turbocharged TSI range-topper. Diesel fans, meanwhile, can choose VW’s new super-smooth common-rail 1.6-litre TDI, available with 74 or 89bhp. Five-speed manual gearboxes are standard on all but the 1.2 TSI, which gets a six-speeder, while the 1.4 petrol has a seven-ratio DSG auto option.

We tried the new 1.2 TSI, which is excellent, pulling strongly from low revs thanks to 175Nm of torque coming in at 1,500rpm. It’s very refined, even at motorway speed. It’s also economical, returning 51.3mpg combined and emitting 129g/km of CO2.

So it won’t be expensive to run – and the 1.2 three-cylinder TDI BlueMotion will cost even less, promising 85mpg and a CO2 figure of only 87g/km!

On the road, the 1.2 TSI demonstrates its mature manners. The driving position is superbly adjustable and, in common with the latest Golf, all the controls are well weighted and precise. There isn’t the same steering feedback or tip-toe agility you get in a Fiesta – instead, the Polo feels more planted and stable. However, it turns into corners quickly and, thanks to a wider track, grips strongly.

Only the 17-inch wheels on our test car – likely to be optional on UK-spec models – let things down a bit by making the ride rather stiff.

That noted, this Polo really does feel like a baby brother to the excellent Golf. And, as with the bigger car, it will undoubtedly enjoy excellent residual values to help offset screen prices that will inevitably be higher than those of the Fiesta. It all adds up to a brilliant supermini.

Rival: Ford Fiesta Another five-star supermini, the Fiesta offers sleek styling and a driving experience that can’t be beaten. It’s brilliantly built with a classy cabin and decent space inside.