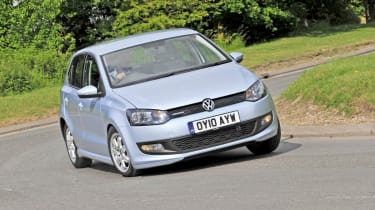 As with the old Polo BlueMotion, this latest model has set a new standard for cleaner, greener motoring, and rivals will struggle to beat its blend of quality and understated class. The three-cylinder engine isn’t particularly refined or punchy, but it compensates by giving the Polo a unique character. The only problem is that the premium price makes buying one an expensive proposition, even if running it won’t be.

This is VW’s all-new Polo BlueMotion – a supermini that’s a superstar when it comes to offering penny-pinching running costs and eco-friendly emissions.

Under the bonnet lies a fresh 1.2-litre TDI three-cylinder engine – essentially the same common-rail 1.6 diesel unit as the Golf, but with the fourth cylinder removed. It produces 75bhp and 180Nm of torque, but the figures that really impress are CO2 emissions of only 91g/km and combined fuel economy of 80.7mpg.

That makes the Polo easily the greenest supermini on the market. The improvements are achieved thanks to stop-start and battery regeneration, plus a host of aerodynamic tweaks, which include a gloss black grille, rear spoiler and deeper front splitter. They also give the VW a purposeful look that’s unusual to find on a small car without any sporting intentions.

Behind the wheel, the three-cylinder engine is noisy yet tuneful, but unless it’s worked hard, acceleration is sedate at best – it reaches 0-62mph in 13.9 seconds.

In bends, the low-resistance tyres don’t offer the grip of normal rubber, but the chassis set-up is an excellent trade-off between handling and ride comfort. Overall, the Polo manages to feel much more grown-up than its rivals, such as the Ford Fiesta.

Dedicated economy models also require slight changes to your normal driving style. The longer gearing means that the Polo will occasionally struggle up hills without a quick downchange. And you have to remember to knock it into neutral while stationary to get the full benefit of the stop-start system. It won’t always kill the engine either – power-draining gadgets such as the air-con and heater will keep the car running.

Interior build quality is high, our only gripe is that the dark dashboard materials give the cabin a subdued, sombre feel. Standard equipment is generous, with air-con and alloys included, but with prices starting at £14,445 for the three-door, the BlueMotion is one of the most expensive models in the range.

Although there’s no road tax to pay, only drivers doing high annual mileages will claw back the initial cost in fuel savings.

Rival: Ford Fiesta ECOnetic  The baby Ford can’t match the Polo in terms of economy or CO2 emissions, but its fun driving experience nearly makes up for its green shortcomings.