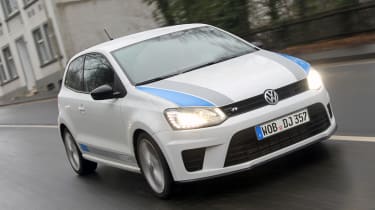 The most powerful Polo is quite a handful, especially when the going gets slippery. But while it doesn’t share the rally car’s four-wheel drive, you can just about exploit its 217bhp engine on the road. The manual gearbox is more involving than the DSG of the standard GTI, too. It’s a shame no right-hand-drive models will be produced, though.

The VW Polo has been a sales winner for years, but now Volkswagen is chasing motorsport success in the World Rally Championship. And in order to meet FIA regulations, the company has had to build 2,500 Polo R WRC high-performance road cars to homologate its new rally racer.

Instead of the 300bhp 1.6-litre turbo engine, six-speed sequential gearbox and four-wheel-drive system of the WRC entry, the road car uses a 217bhp 2.0 turbo engine from the Golf GTI, making it the most powerful Polo ever. The engine is mated to a six-speed manual gearbox, and drives the front wheels only.

And even after the first few miles of driving the new hot hatch, it’s clear the engine delivers overwhelming punch from low revs – often a little too much for the front tyres to cope with.

As well as beating the 178bhp figure developed by the current hottest Polo, the GTI, the Polo R WRC has 100Nm more torque, at 350Nm, ensuring impressive in-gear acceleration. On paper, the WRC is a mere half-a-second faster from 0-62mph than the standard GTI, but it feels much quicker than the 6.4-second time VW claims.

As the seven-speed DSG fitted to the Polo GTI wouldn’t be able to handle the larger engine’s extra torque, the WRC makes do with a six-speed manual. However, while it doesn’t have the sequential gearbox ‘feel’ that would make the R WRC seem more like a rally car for the road, the manual gearbox does deliver a more involving drive.

It’s clear that this Polo is all about performance. As well as the upgraded engine and gearbox, the suspension has been stiffened and lowered, plus larger, 16-inch brake discs have been fitted. These are covered by 18-inch lightweight alloy wheels with wide 225-section tyres.

But even on a dry road the Polo overwhelms its front tyres, particularly in the first three gears, and regularly triggers its ESP system. In the damp, more committed driving means that the yellow traction control light is almost constantly flickering away. It demands plenty of concentration, making it particularly difficult to make the most of the WRC’s hefty power reserves.

The tweaks to the bodywork, meanwhile, are minimal. While the rally car gets swollen wheelarches, a low-slung front splitter and huge rear wing, the Polo R WRC features a subtly uprated front bumper and small roof spoiler. Even the rally-inspired decals are kept to a minimum.

Inside, the WRC features more supportive front seats, trimmed in Alcantara. There’s a sports steering wheel covered in the same material, too, while the motorsport theme is further extended with WRC badging and aluminium pedals.

VW has confirmed that no more than the compulsory 2,500 cars will be built. They’ll all be left-hand drive, and won’t be sold officially in the UK.

In Germany, the starting price is 33,900 Euros (around £29,100), making the most powerful Polo ever a very expensive proposition. Still, it’s quite a bargain if you put it next to the rally car.