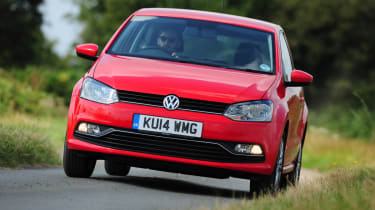 Try as it might, the VW Polo can’t quite knock the mighty Fiesta off its perch. The updated car is very refined, plus its economy isn’t far off the best in class. Trouble is, the design fades into the background. In a market where style-conscious buyers are increasingly unwilling to compromise, VW has failed to address an area most under the spotlight. Still, under the skin, it remains an incredibly accomplished, well sorted car.

On the face of it, the new Volkswagen Polo isn’t really all that new. Cosmetic tweaks inside and out are so minor, they go almost unnoticed. But don’t dismiss this as a lazy facelift, as VW has spent its money on a raft of efficient new engines.

The most eye-catching addition is an all-new 1.4-litre three-cylinder diesel, promising 83.1mpg economy and just 88g/km emissions – although number crunchers will know that the Ford Fiesta ECOnetic and Toyota Yaris Hybrid are both slightly more efficient.

Where the Polo does trump its rivals, though, is with its composure and refinement on the move. VW has managed to cram in the technology and infuse the Polo with the road manners of the larger Golf. Even in such a small car, the three-cylinder diesel is surprisingly hushed. There is a more obvious drone from the engine than in the petrol three-cylinder, but it’s well isolated from the cabin and doesn’t send vibrations through the seat or steering wheel. 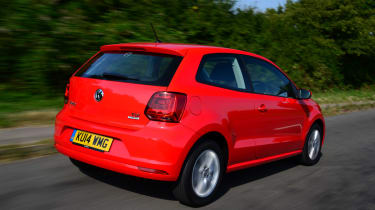 The engine is available with 74bhp or 89bhp. We tried the former, but both claim the same economy. And while only 15bhp separates the engines, there’s a full two seconds between their 0-62mph sprint times, with the 74bhp model taking a leisurely 12.9 seconds.

VW is aware this car will be spending most of its time dawdling around town centres, so it’s been set up with this in mind. The steering is light, but responds well to quicker inputs, and the Polo feels quite nimble compared to the numb Yaris. The diesel is also well suited to city life, with 210Nm of low-down torque giving plenty of shove at low speeds. As a result, you won’t find yourself racing through the five-speed manual box’s ratios as you would in a petrol model. 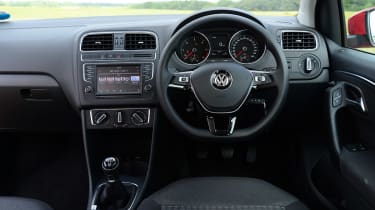 A cosseting ride has always set the Polo apart, as it floats across uneven surfaces like a car twice its size. But as ever, an absence of driver engagement lets the car down – if you’re after thrills, the Fiesta will be more to your liking. The spacious interior has decent rear headroom, although the 280-litre boot is a little smaller than rivals’. If you need extra room, there’s a more practical five-door.

A new five-inch touchscreen – or 6.5 inches in this SE model – has been added inside, so if the car didn’t feel like its bigger brother before, it certainly does now. VW has been clever with its use of materials inside, too, with soft leather on the steering wheel, handbrake and gearlever, although harder plastics lurk further down on the centre console.

Still, equipment is generous. As well as that big display, our SE gets alloy wheels, as well as air-con and the large 6.5-inch touchscreen. But all Polos feature DAB radio, Bluetooth and USB compatibility as standard.