Volkswagen Scirocco to be reborn as hot electric coupe

Exclusive images preview cool new VW Scirocco EV, which is set to offer up to 300bhp 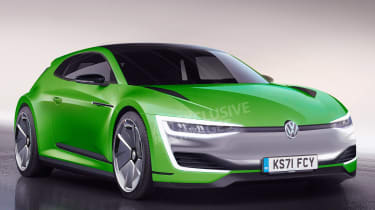 The Volkswagen Scirocco will be reinvented as a sporty two-door EV coupe for its next generation, and it will be based on the company’s new all-electric MEB platform, Auto Express can reveal.

Previewed here by our exclusive images, the Scirocco EV will share many of its components with VW’s forthcoming I.D. family of pure-electric cars. That will allow the new model to keep the current car’s compact dimensions and offer vastly improved interior space.

Speaking exclusively to Auto Express, Volkswagen R&D boss Dr  Frank Welsch told us that in order to use the Scirocco name – which joined the VW range in 1974 – there were aspects of the new car that would need to remain intact.

“For me, we can only use [Scirocco] for a sporty two-door coupe,” he said. “We are not clear on how we will do such a car, and are thinking whether we do an interesting concept based on our electric platform; this could be a great and fun car.”

The Scirocco has been increasingly marginalised in VW’s existing line-up, which is expanding to include a plethora of SUVs. Indeed, the existing version of the sporty hatch, which is now 10 years old, is likely to be dropped altogether, leaving a gap before its electric successor arrives. 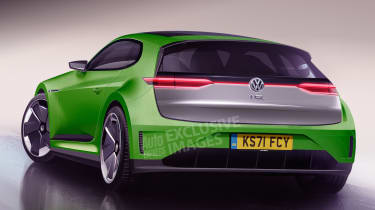 However, Welsch assured us that the rise in popularity of SUVs and crossovers need not compromise the market for sportier models. In fact, he dismissed the idea that cars such as the upcoming T-Roc could fill any gap left by the ageing coupe. “You don’t buy a Scirocco if you have a family,” Welsch told Auto Express. “[T-Roc] is a four-door, and is absolutely perfect for small families.

“If you tell someone, ‘This is a Scirocco’, they have a clear idea of what this should be and of what it should look like,” he said. “If it had totally different proportions from the current car we would not call it Scirocco. It would not fit. It’s like having a new Tiguan concept and calling it ‘Golf’.”

By placing it on the brand’s electric MEB platform, designers and engineers would be able to stay true to the existing Scirocco’s sleek styling, while also improving the car’s packaging and interior space.

The chocolate bar-style modular batteries would be placed flat and under the floor for a low centre of gravity, but the lack of a combustion engine would free up space ahead of the driver for a roomier cabin.

The first I.D. – a Golf-sized family hatch – is due in 2020, and it’ll be another couple of years after that before we see a sportier Scirocco-style variant.

The modular batteries will allow VW to offer the Scirocco EV with various power outputs, but with an anticipated electric range of between 200 and 375 miles. Expect entry-level cars to get around 170bhp, with a hotter Scirocco R boasting upwards of 300bhp thanks to its high-capacity electric batteries and more powerful motors. Four-wheel drive could be an option, because the MEB platform is engineered to cope with electric motors at the front and rear.

It’s unclear how the new car will look at this stage, but it’s expected to inherit many of its styling cues from the I.D. concept first seen at last year’s Paris Motor Show. That means plenty of clean lines, a wide, bold face and striking LED daytime running lights. Sources say that the Paris car is about as short as MEB will go, so the Scirocco is likely to share its wheelbase.

That’s reflected in our images, which mix styling cues from the I.D. hatch – including that model’s ultra-short front overhang – with a more aggressive roofline.

The bright and airy interior should take a minimalist approach to design, with few buttons and switches. The facia will be dominated by a large central touchscreen.

Despite being one of VW’s sportiest models, the new Scirocco will also showcase much of the same autonomous tech as the I.D. hatchback, with full Level 5 autonomy possible later in the car’s life.

Are you happy to see the Volkswagen Scirocco return as an all-electric car? Let us know below...