We enjoy a short drive in VW's I.D. concept, which previews the first of a new range of electric vehicles from the brand

It’s impossible to gauge from the concept how the roadgoing I.D. will drive in 2020. But its clever packaging and roomy, airy cabin show a promising new direction for Volkswagen. The biggest challenge for the firm’s engineers now, in fact, is to deliver enough of the show car’s hi-tech tricks, and a reasonable range, while still keeping VW’s promise that the I.D. will cost Golf money.

Volkswagen actually built pure-electric versions of the Mk1 and Mk2 Golf more than 30 years ago - but only recently has the firm really stepped up to the plate, launching the e-Up! and two versions of the e-Golf. In the near future, though, the German brand believes that it will need a more bespoke set-up to really exploit e-mobility - and that’s where I.D. comes in.

We’ve been to Lisbon to have a short spin in the I.D., a funky-looking concept that was unveiled at last year’s Paris Motor Show. I.D. previews the first of a whole new range of pure-electric vehicles from VW; it’ll reach showrooms by 2020, apparently, and senior company sources say it’ll cost around the same as a decently specced Golf diesel - so around £22,000. 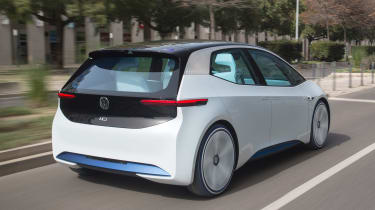 Think this is a bit of a folly? Think again. VW says the I.D. is every bit as important as the Mk1 Golf, or the original Beetle; indeed, by 2025, it estimates that one in six of all the cars it sells will have purely electric power. That’s around a million EVs per year - and to support it, VW has developed a whole new platform that’s designed around accommodating large battery packs and electric motors. It’s already designated a factory for I.D. production, too - at Zwichau in eastern Germany.

Called MEB, the new chassis architecture will also underpin models from the VW Group’s other ‘volume brands’: SEAT, Audi and Skoda. It can have front- and rear-mounted motors, so it could support four-wheel-drive electric SUVs. And while the I.D. concept is expected to be the smallest model in the line-up, MEB will support cars of up to around 4.8 metres in length.

In fact, one of the first things to strike you about the I.D. concept as you approach it is how small it is. It’s a hatchback that’s around 15cm shorter than the current Golf, so only a little bit longer than the Polo. But its wheelbase is within a couple of centimetres of a Passat’s - a key development that’s only been made possible by MEB. 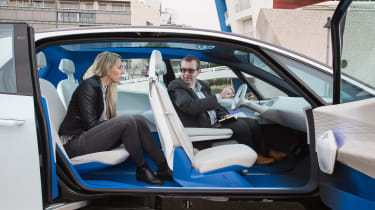 The overall look is clean and sophisticated - although there are show car elements that are likely to be toned down for production. The rear sliding doors will probably be replaced by conventional items; this, in turn, will mean a B-pillar where currently there’s open space. And the side-mounted cameras will be swapped for regular mirrors.

Thankfully, the one-off concept’s basic electric powertrain will also be reconfigured, to become a 168bhp electric motor driving the rear wheels. VW is likely to offer the car with a choice of battery capacities to suit all wallets and lifestyles - everything from around 200 miles up to an impressive 375 miles. It’s worth noting, of course, that these figures may look much more ‘normal’ by the time 2020’s battery tech kicks in.

The concept is valued at more than seven figures, so VW didn’t allow us to take it much beyond 15mph along our short test route. Driving dynamics weren’t up for evaluation here anyway; what we were able to sample is how the I.D.’s cabin environment feels on the move - and it’s pretty special. 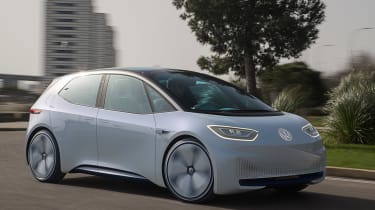 Just as the small exterior dimensions may surprise, so, too, will the generous amount of space once you climb aboard. There’s enough space for four tall adults to sit in comfort - and we’re told the production model will take advantage of the flat floor to add a fifth space as part of a rear bench seat.

It’s incredibly airy, too, thanks to a spectacular full-length panoramic glass roof that bathes the soft-shaded cabin materials in light. And even where there are structures and materials, their design is beautifully simple. There’s no screen in the middle of the dash - nor a centre console. Even the central armrest can be moved fore and aft - or removed completely if it’s not needed.

There are, in fact, no physical switches. The concept’s gearbox is controlled by touch-sensitive areas at the bottom of the small steering wheel. And elements like heated seats, ventilation and even mobile phone controls are integrated into panels in each of the doors. The only screen is the driver’s instrument panel, a hi-res unit that’s viewed through the steering wheel instead of over it and is capable of displaying navigation info, speed and info on what you’re playing through your smartphone.

How much of this will make production? Christine Leuderalbert, a marketing specialist in VW’s e-Mobility division, says the firm is determined to keep the button count to a minimum. “We know there are some elements like the hazard switch that have to legally have a button,” she explains, “but beyond that, we’re exploring lots of possibilities, including gesture and speech controls.” 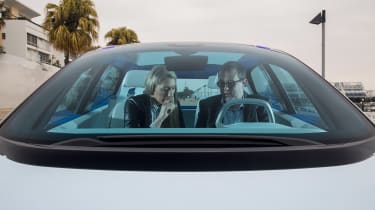 She acknowledges that the I.D.’s fascia will need to incorporate some storage space - right now, there’s nowhere to even store your phone, let alone a glovebox - but also points out that the fascia’s fabric finish would offer great scope for personalisation. The production car may also get a front boot (a ‘frunk’) to boost practicality and take advantage of the fact that there are no oily bits in there. And the panoramic roof will be offered, at least as an option.

Later in the I.D.’s life - by around 2025, VW says - the car will offer full Level 5 autonomy. And the concept already showcases some of the additional possibilities that this will bring; touch the centre of the steering wheel for three seconds and it glides slowly into the dashboard, freeing up space ahead of the driver for them to read a magazine or watch a smartphone.

There are exterior touches, too; the headlights use their multiple LEDs to ‘gesture’ to pedestrians and other road users, showing that the I.D. is aware of their presence and prepared for them to move in front of it. This sounds like a gimmick but it succeeds in giving this most technical of vehicles a welcome shot of character. After all, how many other vehicles can give their owner a cheeky wink every morning?