As the flagship performance coupe, the VW Scirocco R is the most powerful Scirocco ever produced 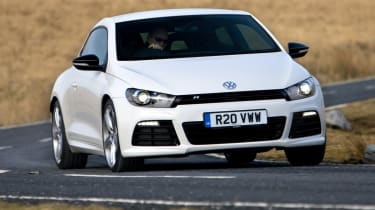 The Scirocco R gives Volkswagen’s fantastic coupe the performance to match its stunning looks. Under the bonnet, 261bhp has been squeezed from the 2.0-turbocharged TSI engine. Only the fastest and most extreme VW’s get to wear the R badge and with its hefty price tag the Scirocco R is an expensive choice but standard equipment reflects the cost. Appearing even lower, wider and purposeful than the already sporty standard car, the R’s lowered suspension and unique body kit help it stand out. There’s a choice of six-speed manual or dual clutch DSG gearboxes.

R stands for racing. And given that it’s closely related to the Scirroco R Cup racer it’s no surprise the road legal version places plenty of focus on performance. Thanks to uprated internals, high-pressure injectors and a bigger turbo, the familiar 2.0-litre TSI engine produces 261bhp. As a result the R sprints to 60mph in six seconds, while a healthy 350Nm of torque means in-gear response is excellent. A rasping exhaust note, excellent body control and reasonable traction are plus points, while Adaptive Chassis Control (ACC) comes as standard - allowing you to adjust the dampers, steering weight and throttle response at the touch of a button.

Despite serious performance the Volkswagen Scirocco R has a combined economy of 34.9mpg. Opt for the DSG transmission and this improves a fraction to 35.3mpg. Emissions are 189 and 187g/km, respectively, which combined with a high list price makes the R a relatively expensive company car choice. With its power the R earns a Group 34 insurance rating, while Volkswagen offers fixed priced servicing across their large dealer network.

The Scirocco R shares the standard car’s bodyshell, but a separate production line adds all its unique R components. A special bodykit makes the R look lower, wider and meaner than the standard car. Large 18-inch wheels are standard, while rubbing strips are removed from the doors for a smoother profile. LED running lights give the front more aggression and the larger roof spoiler and wide-set twin exhausts – an R trademark – finish a muscular look that really turns heads.

When viewed as a hatchback the Scirocco R's limited rear passenger space is a negative, but against its coupe rivals the R is actually pretty practical. There’s more cabin space than in the Audi TT, while the hatch tailgate makes it more practical than the BMW 1 Series Coupe. Despite the high load lip, the 312-litre boot is a decent size, while the pair of rear chairs fold with ease to increase luggage volume to 1,006 litres. There’s a decent amount of cabin stowage, too.

In addition to standard stability control the Scirocco R comes with an electronic differential lock to improve traction. Externally the R has very bright LED running lights and Bi-Xenon headlamps and when it comes to passive safety kit - curtain airbags, ISOFIX, whiplash optimised head rests are standard. Volkswagen’s performance models have the same reputation for durability as mainstream offerings so there’s nothing to fear in choosing the rarefied Scirroco R. 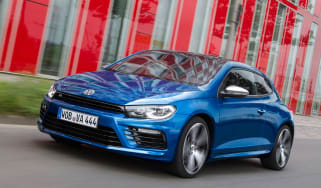 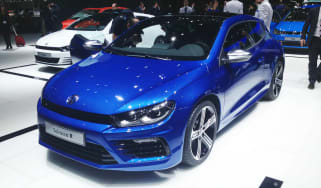