We drive the latest version of the Volkswagen Scirocco GTS, but is it starting to show its age? 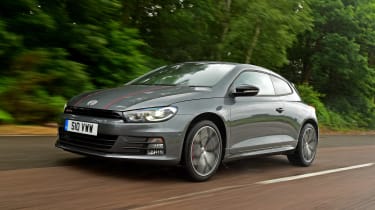 It’s still a looker and decent fun to drive, but the Scirocco GTS’s hefty price tag is a bit of a stumbling block. The sensible money goes on a three-door Golf GTI with identical performance and a £1,000 saving. It’s even better to drive, and features a far more modern interior, too. Having said that, UK buyers snap up more Scirocco’s than any other country in Europe, so there’ll certainly be some interest over here.

Eight years in the car world is enough time for a car to age dramatically, but that doesn’t seem to apply to the VW Scirocco. The current model appeared back in 2008 – but even today it looks as fresh as it did on the designer’s sketch pad.

This is the latest version – a limited edition model that has ties with the original Scirocco GTS launched back in 1982. Whereas the original developed a miserly 90bhp from a 1.8-litre engine, the modern day interpretation packs a Golf GTI-matching 217bhp 2.0-litre turbo.

It follows the same formula as the pre-facelift GTS, bringing visual enhancements in the form of body decals that stretch over the bonnet, roof and tailgate. Some potential buyers will be pleased to hear these can be deleted as a no cost option. 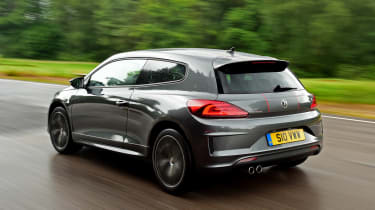 While the GTS may match a basic Golf GTI in terms of power, it does miss out on a proper limited-slip differential. Instead, an electronic XDS system (a £210 option) nips the front brakes to help turn-in, but over-enthusiastic cornering will result in speed-sapping understeer.

Ease off a little and the front wheels find more bite, while the steering becomes more communicative. The Scirocco is one of the only models in VW’s range that hasn’t made the switch to the ubiquitous MQB platform, instead sticking with the old PQ35 chassis that underpinned the old Mk5 Golf back in 2005.

Despite its prehistoric running gear, the Scirocco’s timeless good looks are matched with a sprightly driving character. The 217bhp 2.0-litre turbo revs keenly through to 7,000rpm thanks to 350Nm of torque, and a tight, snickety throw on the six-speed manual gearbox completes what always has been an effective powertrain combination.

It’ll do 0-62mph in 6.5 seconds, which can only be described as moderately brisk by today’s standards. That said, the Scirocco has never been about the raw numbers. 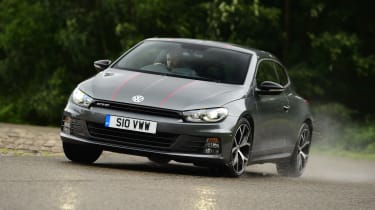 One number that will stand out though, is the £28,445 price tag. Tick a few boxes and that soon rockets – our test car featuring extras such as adaptive dampers and Bi-xenon lights takes the price north of £31,000.

Those adaptive dampers don’t help the ride quality either. Even in the softest setting the Scirocco hops and fidgets about on the road – it’s here the coupe is beginning to show its age despite its pretty face.