The new Volvo V90 estate made its first public appearance at the 2016 Geneva Motor Show, hard on the heels of its Stockholm reveal in mid-February - and now full pricing details have been revealed.

Costing around £2,000 more than the equivalent S90 saloon, the V90 starts from £34,555 in the UK for the D4 diesel in Momentum trim - that makes it slightly cheaper than the £34,815 BMW 520d Touring. Standard kit includes heated leather seats, Drive Pilot assist and LED lights, with higher-sped Inscription cars getting Nappa leather seats and 18-inch alloy wheels. The more powerful D5 AWD diesel costs from £41,555.

The new estate car joins the S90 saloon and XC90 SUV in the brand's premium model range, with all three sitting on Volvo's SPA platform. There's a strong family resemblance between the siblings, with the V90 also getting the distinctive ‘Thor’s Hammer’ LED headlamp designs and an oblong central grille with a bold Volvo badge, as first seen on the XC90.

At the back there are some L-shaped rear lights that combine with the prominent tailgate to give the car a far less boxy look than the V70 it replaces. In profile, the V90's shoulderline swoops upwards towards the rear, and the sloping screen and neat spoiler give it extra presence. 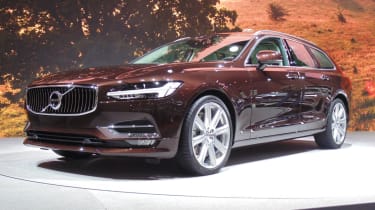 The car will be powered by the SPA platform's range of Drive-E turbocharged four-cylinder engines. In some markets the T5 and T6 petrol engines offer 251bhp and 316bhp respectively, but they won't be available in the UK yet.

Both diesels use an 8-speed automatic gearbox (with a 6-speed manual on the entry-level D4), which helps keep economy high and emissions low. The entry-level D4 diesel emits 119g/km in the V90, and returns 62.8mpg. The more powerful D5 comes with all-wheel drive, which means emissions go up to 129g/km and economy falls to 57.6mpg. 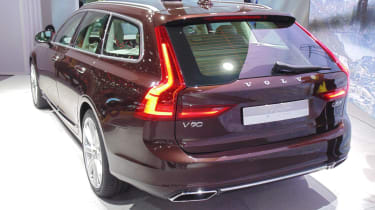 Just like the S90 there will also be a T8 Twin Engine plug-in hybrid model, with 404bhp and an electric-only range of about 25 miles. With that much power available the V90 T8 will go from 0-62mph in just 5.2 seconds, and yet emits just 47g/km of CO2 and returns a quoted 135mpg.

The interior is just as plush as those of the S90 and XC90. There's the same minimalist dash design and the now familiar central touchscreen with its portrait layout, and sat-nav is likely to come as standard on all models. Smartphone connectivity including Apple CarPlay is available, and like the S90 there's a high-end Bowers & Wilkins stereo system as well.

The new Volvo V90 is 4.9m long, 1.9m wide and 1.5m high, which means plenty of space inside. The total luggage capacity of 1,526 litres (including underfloor storage) is actually less than a BMW 5 Series Touring or an Audi A6 Avant, though. It's smaller than the space inside the previous Volvo V70, too. The rear seats split and can fold completely flat. 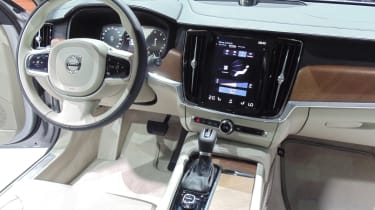 There will be two trim levels in the UK, Momentum and Inscription, and more than half sold are likely to be in top-spec guise. Standard kit includes LED lights, leather seats, sat-nav and a 9-inch touchscreen display.

Volvo also confirmed it will be one of the first carmakers (alongside Mercedes with the E-Class) that offers a car without a physical key. It uses a smartphone app to unlock the doors, boot and even start the engine remotely. Customers can opt for a standard key if they prefer, however. 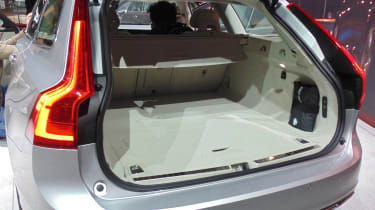 Now read our review of the Volvo XC90 T8 hybrid...