It's slightly old school, but the new Volvo XC60 D4 fulfils its brief as a company car tax-friendly workhorse 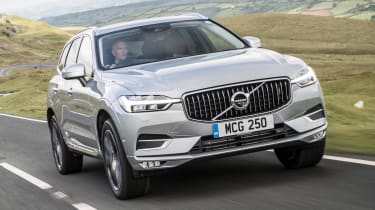 Pure-diesel, company car-focused models like the XC60 D4 are looking increasingly niche these days, but Volvo’s option looks a clever one. It could save choosers money over rivals from BMW and Audi, while still bringing strong enough performance, an appealing cabin and comfortable cruising ability. In many respects this feels like a car that time is passing by – but that shouldn’t mean that it won’t find customers in the here and now.

Remember the days when the go-to fuel type for a family SUV was diesel? They’ve been and gone, we’re told - not least by Volvo, which says it won’t launch any new purely combustion-engined cars at all after this year. Yet here is the new Volvo XC60 D4, a slightly old-school, company car tax-friendly offering that the company is sneaking into its schedule just before it goes all electrified.

Of course, this car doesn’t really deserve to be called old-fashioned, because the diesel engine under its bonnet is the company’s latest offering, equipped with the sort of Euro 6 technology that means it’s emitting less harmful NOx than many petrol cars. It’s a 2.0-litre four-cylinder twin-turbocharged motor, with 188bhp and 400Nm of torque.

Here’s the trick, though: this diesel XC60 is front-wheel drive. Cutting out the additional transmission gubbins helps to keep fuel efficiency at a more than respectable level, compared with Volvo’s range of more potent and four-wheel-drive mild hybrids. Indeed, by emitting just 129g/km of CO2, this is by some way the most efficient XC60 without a plug. 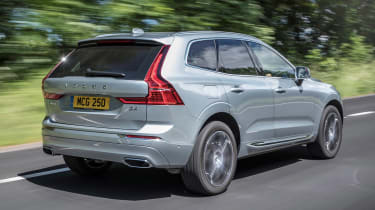 And since it is, in Momentum form, the entry point (from £38,715) in the revised XC60 range, it’s clear that Volvo still believes there’s a market for fleet operators and company car choosers who are still focused on Benefit-in-kind tax rates. Significantly, it’s two or three bands lower than four-wheel-drive diesel rivals like the BMW X3 and Audi Q5.

The good news is that those who remain faithful to regular diesel power shouldn’t feel short-changed by the XC60 D4. It’s an honest workhorse, with a 0-62mph time of 8.4 seconds but more importantly, typical diesel shove in the mid-range. This allows the smooth-shifting eight-speed automatic gearbox (a manual isn’t even an option) to keep you below 2,500rpm; unless you stand on the throttle, in fact, you’ll achieve strong enough acceleration for most everyday situations.

Where the powertrain can’t quite match the sister petrol motor, or the T8 plug-in hybrid, is in general engine smoothness. It’s never what you would call harsh, but there is a metallic twang to the note coming from under the bonnet as you get up to speed. It quietens down (but doesn’t disappear) once you’re cruising. 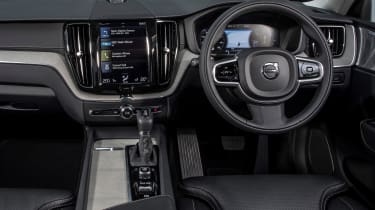 More than many of its stablemates, this car showcases Volvo’s focus on comfort instead of on-the-edge driving dynamics - so it won’t like to chase an X3 down a country lane. The steering is numb and lifeless, too. You’ll need to put the (noticeable) body roll down as a price worth paying for a generally compliant ride that stays composed over all but the worst surfaces.

The rest of the XC60 package is as appealing as ever. The cabin is standard Volvo fare, with a portrait-layout infotainment system that has its quirks but remains better than the class average. The choice of materials isn’t flawless but it’s generally a pleasant place to spend time - helped, of course, by Volvo’s excellent front seats, which remain among the best in the business.

The overall practicality isn’t quite a match for either the Q5 or the X3, mind you; the XC60 gives up the best part of 100 litres in everyday boot capacity, and about double that figure once the rear seats are folded down.