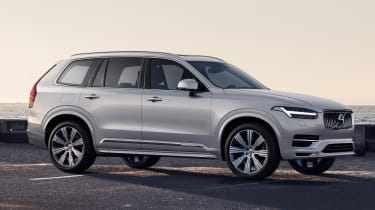 The updated Volvo XC90 is now on sale in Britain and full UK prices and specifications have been revealed.

In the B5 diesel, the setup harvests energy that would otherwise be lost under braking, which can then be deployed under acceleration to reduce the combustion engine’s load. Mild hybrid petrol models are coming soon. 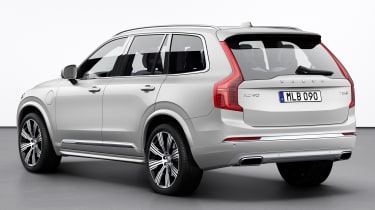 According to Volvo, the system reduces fuel usage and tailpipe emissions by 15 per cent in real-world driving. The new mild hybrid models will be signified by ‘B’ badging, with B5 and B6 petrols coming and a B5 diesel taking the place of the D5 model.

The existing T8 plug-in hybrid remains at the top of the range. This gains similar energy recovery tech through an updated brake-by-wire battery charging system, but also gains a larger battery. It sizes up to 11.8kWh, upping the all-electric range to 28 miles.

Cosmetically, not much changes on the outside. A new grille is the same size as before, but features a new concave design. Elsewhere, there’s a couple of new paint colours and alloy wheel designs. R-Design cars are now equipped with black-high gloss finishes on the exterior trim, such as the door mirror casings and the roof rails, while a new slate coloured leather upholstery option arrives.

As ever, Volvo wants to be seen at the forefront of automotive safety, and the XC90 adds a couple of updated features. An Oncoming Lane Mitigation system was introduced on the smaller XC60, and now comes equipped on the XC90, while its cross traffic alert system can now autonomously brake if necessary.

Do you like the look of the new facelifted Volvo XC90? Let us know in the comments below...