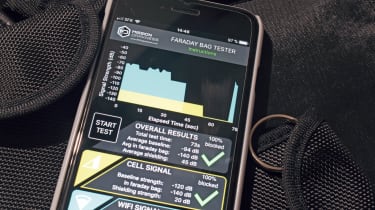 Keyless entry and starting for your car is convenient and user-friendly, but it does leave you vulnerable to hi-tech thieves. These criminals use relay attack devices to ‘read’ the key from outside your house. With the code copied, they can simply drive off in your vehicle.

Storing your key in a Faraday bag, lined with layers of metallic material, is the way to foil them and keep your car safe. The key needs to be placed inside the bag from the moment you plip the locks. If large enough, it can also be used for a mobile phone and credit cards to prevent hacking and fraud. So which is the one to keep your keyless car safe? We put eight to the test.

With the key in a bag alongside the handle, we tried to open the door and then attempted to release the locks by pressing the buttons. Inside the car, we tried to start the engine.

We used an app to check for phone, WiFi and Bluetooth signal-blocking. Each product’s build quality was also rated (gaps in stitching can allow the signal to escape), plus size and practicality were balanced against cost per gram. Prices were taken from online sources.

In a test where all the products worked perfectly, points scores were very close. Based on value, build and practicality, we reckon the best overall signal blocker is the Defender, with the key-only Disklabs KS1 and Ecence close behind. 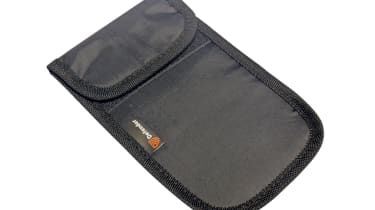 Our reigning champ hasn’t changed since its last win, so the spec remains the same. It’s bigger than many rivals, at 185mm x 115mm, and the heaviest, at 42g. But that size adds to its versatility because the pouch was also able to hold quite a large smartphone, cutting WiFi and Bluetooth signals to prevent hacking.

Putting in a big key, such as one from VW or BMW, was a squeeze, but flatter ones fitted easily. We liked the pouch’s build quality, too, but its size would mean storing it in a handbag, large pocket or briefcase on the move. Yet being able to protect a phone and key would seem worth it, especially at this price. 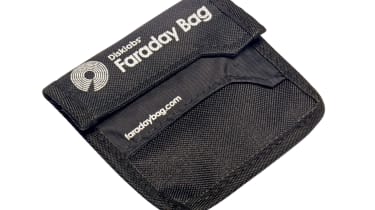 At about two-thirds the size of our reigning champ ,the KS1 wasn’t large enough to hold a phone, but it’s hard to imagine a key being so big that it wouldn’t fit. Another bonus was that this bag has a hook for hanging it in the house, though Disklabs advises not storing the KS1 in a pocket, in case friction lessens the effectiveness of the shielding.

Despite looking the same, the bag’s specification has changed since our last test, when it finished in second place. However, it proved just as effective this time round, with the key unable to communicate with the car. 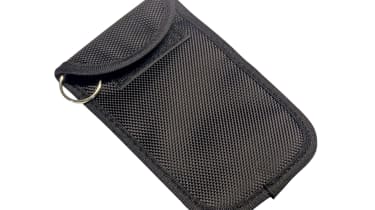 Available from Amazon, this is identical to the Halfords and B-G offerings. The material is thick and not dissimilar to that of the Disklabs, although we found the join along the lower edge was a bit amateur – it hadn’t actually split, but with regular use it might soon start to. The pouch has clearly been designed solely for key protection, and fitting was a bit tight, especially when pushing the key out from the bottom. All the car’s signals were successfully blocked and it was also competitively priced, which placed it above its two cousins. 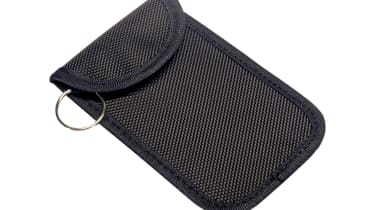 B-G offers a choice of two Faraday bags, the second being larger and suitable for phones, and about the same size as the Defender, with a price tag of £12.99. This smaller version matched the Halfords and Ecence note for note, sharing similar positive and negative points. On the back is a simple chrome ring, presumably for hanging in the house, and there’s also a conventional key ring attached to the top. Clipping on the car key meant it was almost impossible to get in the wallet, and other keys (house, office) could be fitted, although it made everything quite clumsy. 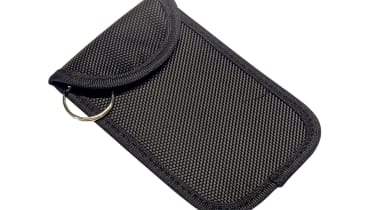 The third of the B-G/Ecence trio, the Halfords lost out on price, but all other aspects were the same. We liked the general feel of the wallet; it seems strong enough to cope with regular use, ignoring that ungainly join. The two-ply copper prevented all signal leakage and the interior compartment would be handy for notes and parking tickets. Unlike the other two, it specifically mentions its use for credit cards; it would take a few alongside a key.

TVL’S wallet is similar to the TrackingUK version and also blocked phone signals while the flap was held shut. Another vinyl wallet, it felt better made and should handle constant opening and closing, but might not be so good at being regularly folded into a pocket or handbag. However, it was over 50 per cent heavier (if still far from hefty), at 26g. It stopped all signals, but it was the second priciest choice and topped the list for key-only wallets. 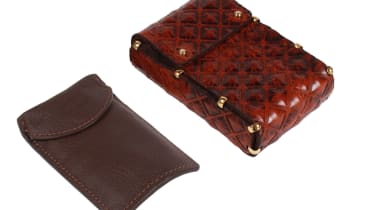 The AMJ differs from its rivals in most respects. It arrives in a stylish, well made and sturdy leather ‘box’, which also prevents accidental scuffing. The cover is made from top-quality Italian leather and black velvet, with two protective shielding materials inside. And we liked the magnetic strip on the hood, which ensured the cover stayed closed even in a pocket.

Each cover is designed to fit specific car keys, and every one is logged to its owner so that any warranty work can be traced back. Our sample was easy to use and it protected perfectly, blocking both door opening and engine operation. It simply oozed style, but that has to be balanced against the substantial price. 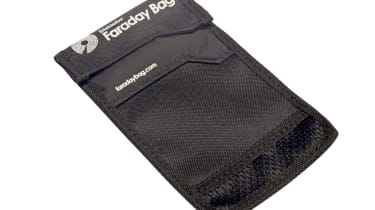 The larger, phone-sized Disklabs offering mirrored the quality and style of its smaller sibling, as well as the official police accreditation. It’s a bit bigger than the Defender, and could handle both sample phones and blocked all signals to keys and phone, although fitting a bulkier (VW, BMW etc.) key with a phone was tricky. Initially it seemed expensive, but the price per gram was a little below average, although it couldn’t match the top-value Defender. 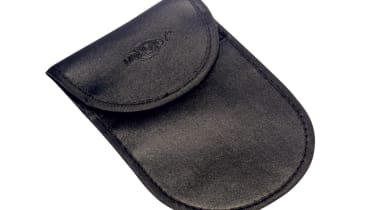 At just 16g, the TrackingUK wallet was the lightest here, making it unobtrusive and easy to fold intoa pocket when not in use. We’d worry about the durability of the vinyl construction and stitching, but it certainly cut all the signals on the keys. It even worked with an iPhone 6, albeit with the flap held tight shut – not a practical application, but a good test. In most cases, it could handle a pair of keys, but it’s hard to ignore that fairly high price.

Now your keys are safe, why not take a look at the best steering wheel locks on the market?