How to choose the best soldering iron 2018

We take a look at some of the best soldering irons, and help you choose the best kit on sale here in the UK 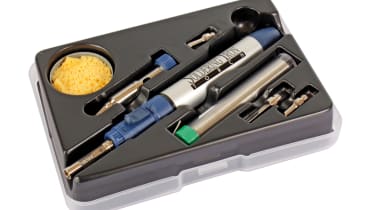 Even when cars are full of complex electrics, a soldering iron is a handy tool. It can be used for basic electrical repairs, adding accessories and, with practice, ‘stitching’ broken plastic bumpers and panels.

Previous champions in our tests have included the Laser 3410 and the top mains electric version was the Draper 71418 (since replaced by the 85356). We put the established Laser and latest Draper up against Sealey’s new iron – the rechargeable SDL6.

We soldered a spade terminal, hooked up a speaker and stitched a crack in a plastic bumper, plus checked tool temperatures. Marks were given for effectiveness, ease of use, accessories and online prices.

The Laser balanced power, portability and accessories. The new Sealey was good, but didn’t quite hit the mark. And while the Draper is basic, it’s fine for limited work, if power is nearby.

The Laser is the best-equipped iron here; its flip-lid box includes four tips, solder and a sponge. The instructions didn’t advise how to solder and it’s a pity there’s no electronic ignition; you use a match or a cigarette lighter.

It didn’t get as hot as the Draper, but 80 deg C was plenty and, crucially, constant. This made soldering our joins easy and it was just as good when stitching the bumper. As it’s gas-powered, there are no real restrictions; no cable or charging time to allow for, just connect the butane cylinder and carry on. 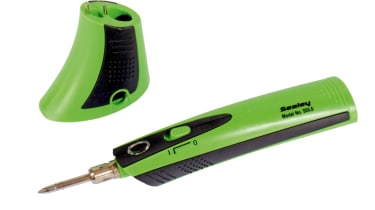 No longer does electric soldering mean being constrained by having to be near a mains socket. The latest Sealey is super stylish, the curvy green device slotting neatly into its charging dock, where a full charge takes three to four hours. The 3.7V battery managed a max temperature of around 75 degrees Celsius, which was enough for all our tests.

But the button had to be held down all the time in use, which is irritating, and after several soldered joins, we had to wait a while for the tip to heat back up. It fared better on the bumper, stitching without interruption, largely because the heat sink effect of plastic isn’t so great. Clean and cable-free, it would be good for light electrical work, despite having no battery meter or choice of bits. 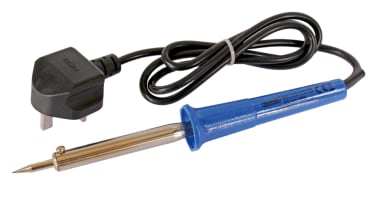 Everyone’s idea of a soldering iron, the Draper is as basic as they get, coming with just a single pointed tip and a metal stand. At 60W, it’s literally hot stuff, reaching 110 deg C after five minutes. Unsurprisingly, it soldered perfectly and stitched some neat joins on our bumper.

Compared with its rivals, it’s rather bulky, exacerbated by the mains lead, and it would be good to have a power warning light. But it’s the cheapest here, less than half the price of the Sealey, and should be considered if you don’t need portability.

Buy it from Draper Tools here