Sound if unspectacular performer on the track, although fuel economy is somewhat disappointing. 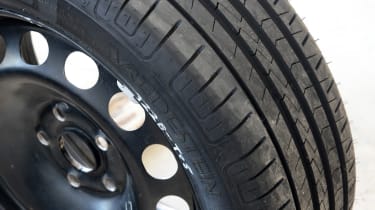 Sound if unspectacular performer on the track, although fuel economy is somewhat disappointing.

What a difference two years can make. Back in our 2012 test of this size of tyre, the all-new Sportrac 5 finished second overall, and only just missed out on another Vredestein tyre test victory. Two years on, and while we’re testing a V speed rating version (the 2012 tyre had an H speed rating), it’s now a touch behind rivals.

The competition has improved, but Indian-owned Vredestein will still be disappointed that the Sportrac 5 didn’t make the podium in any of our individual tests. This isn’t what we’d expect from a model launched in the tyre labelling era.

As our table shows, it was close to the pace in some of our assessments, but some way down the results. For example, it felt good on the wet circuit, with any loss of grip easily controlled. It attacked the apex on turn-in, but washed wide earlier than most rivals on the throttle.

The sharpness was absent in the dry, where it needed plenty of lock through the longer turns and generally felt soft. Plus, the Sportrac 5 needed just over 1.5 metres more to stop than our winner in the wet, and two metres more in the dry – not huge differences, but they hurt in a very closely matched pack. The two aquaplaning tests saw more of the same, with rivals enjoying a small advantage.

Overall, it seems as if Vredestein has yet to fully master the balance between wet grip and fuel economy that the best here have managed to achieve.

So we look forward to seeing how a company with such a great record in our tyre tests responds to this result.