Good all-rounder with few apparent weaknesses, and the best when it comes to economy. 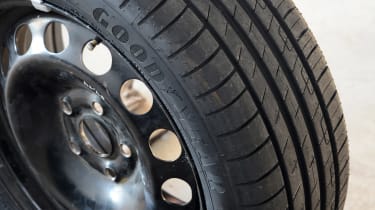 Good all-rounder with few apparent weaknesses, and the best when it comes to economy.

Goodyear’s EfficientGrip took top spot in our 2012 test of the same 16-inch tyres, albeit limited to economy-focused, H-rated products. We’ve tested the Performance version this time round, and it has to settle for a runner-up spot – but it was close.

As with the standard EfficientGrip, the Performance model’s success was based on its wet road prowess. Engineers at Goodyear have matched their counterparts at Pirelli in managing to create a tyre with good wet grip and strong fuel economy, as the Performance tops our rolling resistance table. And it took a joint second in the wet braking test, just over half a metre behind its Dunlop stablemate in first place.

The tyre also carried this liking for soaking roads on to the wet handling circuit, where it felt secure and well balanced with plenty of grip through longer turns. Another top three for wet cornering, and it was well on the way to a great placing overall. It was less successful in our aquaplaning tests, although the differences to the best were relatively small here.

So often with Goodyear, its success in the wet is countered by less impressive results in the dry. It wasn’t the sharpest tyre around the twisty handling circuit, feeling soft compared to the best, but it hung on well and was only a fraction off the ultimate pace in equal fifth. Braking saw a similar sixth place finish.

As we’ve seen with the Hankook and Pirelli, that dry track softness meant a good result in the cabin noise test.