The new Alfa Romeo Tonale compact SUV is due to go on sale towards the end of next year. It joins the Giulia and Stevio in the Italian brand’s line-up and forms part of FCA’s current offensive on the crossover market, with a Volkswagen T-Cross-rivalling Alfa Romeo and a Porsche Macan-rivalling Maserati expected in the coming years.

A recent suite of leaked images previewed the production model Tonale’s styling in full – and the good news is that its design hasn’t strayed too far from the concept, which was displayed at the 2019 Geneva Motor Show. The images were leaked first on an Italian car forum, before making their way on Instagram.

Naturally, some details have been toned down for the production car. The front bumper is a little less angular, likely to the benefit of pedestrian safety, while the enormous show car alloy wheels have been ditched for more reasonably sized alternatives. The front and rear lights are also a little larger than the concept’s and the door mirrors are more conventional.

However, plenty of trademark Alfa Romeo design details will feature on the Tonale, most notably the traditional heart-shaped radiator grille, offset front number plate and concealed rear door handles which are Frenched into the car’s C-pillar.

The Tonale will sit below the Stelvio in Alfa Romeo’s line-up. It will share its platform with the Jeep Renegade, albeit with a range of revisions such as new suspension, upgraded brakes and a new plug-in hybrid powertrain. The Tonale will be Alfa Romeo’s first PHEV model, debuting the technology ahead of its launch on the Giulia saloon and Stelvio SUV.

Alfa Romeo is yet to reveal an official statement on the Tonale’s engines and specs but, speaking from the Geneva Motor Show, Alfa’s European boss Roberta Zerbi told us: "Clearly we are working on the plug-in technology for the range. Tonale will be the first." 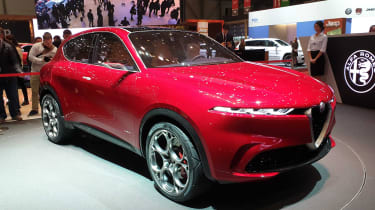 We expect the Tonale’s drivetrains will be pulled from elsewhere within the FCA Group, with likely options including the latest Firefly petrol engines from the mechanically similar Fiat 500X. Given how sharp the Stelvio is, the Tonale will probably be one of the better models to drive in its class.

When it does go on sale, the Alfa Romeo Tonale will enter an exceedingly crowded SUV market at the very closely-fought small SUV end. The newcomer's size pitches it alongside cars such as the BMW X2, Volkswagen T-Roc and Audi Q3, as well as being a premium alternative to more mainstream models such as the SEAT Ateca and Nissan Qashqai.

Why is it called Tonale?

The 'Tonale' moniker (pronounced 'To-na-le') follows on from Alfa Romeo’s 'Stelvio' nameplate, being also borrowed from a mountain pass in the Alps. At 1,883m the Tonale pass in Northern Italy is lower than the famous Stelvio; a suitable fit for Alfa’s more diminutive SUV model. The mountain pass is also a popular route to ski resorts in the region, further emphasising the car's lifestyle aspirations.

Now read our review of the Alfa Romeo Stelvio Quadrifoglio. Let us know your thoughts in the comments section below…