Aston Martin will become the title sponsor of Red Bull’s Formula One team next year and may develop its engines from 2021. 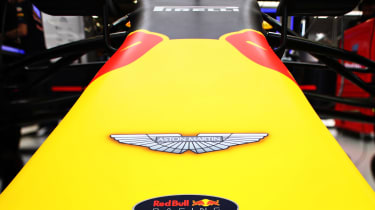 Aston Martin and Red Bull are joining forces in Formula One with the British sports car brand set to become the title sponsor of the Red Bull F1 team from next season.

The expansion of the pair’s existing relationship will include the establishment of an Aston Martin ‘Advanced Performance Centre’ at Red Bull’s Milton Keynes HQ in Bucks, creating 110 new jobs. The partnership will lead to future collaborations along the lines of the Aston Martin Valkyrie hypercar that saw involvement from Red Bull’s renowned chief designer Adrian Newey. The 150-car allocation for the Valkyrie has already sold out before the first one has rolled off the production line.

Red Bull Team Principal Christian Horner said: “Our Innovation Partnership with Aston Martin has been a pioneering project from day one. Having conceived and created the remarkably successful Valkyrie together in 2016, we extended our relationship this year and are now delighted to further strengthen the Partnership.” 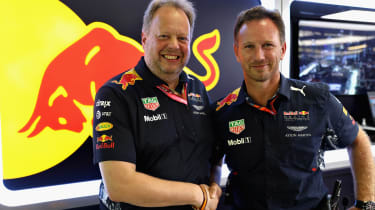 Along with the new performance engineering facilities and prominent Aston Martin badging across Red Bull’s F1 cars in 2018, there is an opportunity for Aston Martin to potentially develop the Red Bull team’s power unit beginning from the 2021 season.

Aston’s CEO Andy Palmer said of the possibility of supplying Red Bull with Aston Martin power in the future: “Power unit discussions are of interest, but only if the circumstances are right. We are not about to enter an engine war with no restrictions in cost or dynamometer hours but we believe that if the FIA can create the right environment we would be interested in getting involved.”

Red Bull Racing’s relationship with Renault has become fractious over the past few seasons with the French company’s F1 hybrid engine lagging behind the performance offered by rivals Mercedes and Ferrari.

With McLaren taking over the supply of Renault engines originally earmarked for Toro Rosso - now partnering with Honda for 2018 - the French manufacturer has decided to end its relationship with Red Bull. The partnership has been under strain for some time, with Red Bull branding its Renault engine supply with a TAG Heuer sponsorship deal since 2016.

Current Formula One engines have been criticised for being too costly and too complex, with teams and drivers having to constantly manage performance and efficiency during the race. Rumours of more powerful twin-turbo V6 engines that will be more challenging for the drivers yet still with a careful eye on efficiency have been circling for a while. Combined with lower development costs and the idea of more exciting racing, that could tempt Aston Martin into the sport. 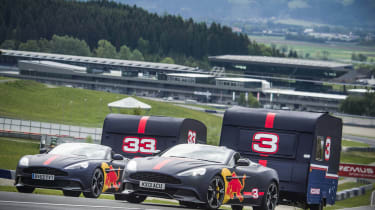 Aston already has a tie-up with Mercedes-Benz for use of engines and electrical architecture in its road cars, but Andy Palmer’s comments suggest any Aston Martin F1 engine would be much more than just a rebadged Mercedes unit.

Instead, Aston is more likely to work with the likes of racing engine specialists Ilmor. The British firm, run by Mario Illien, used to build Mercedes’ F1 engines before that part of the business was taken over by the German firm.

Illien has been consulting with the FIA on the planned engine changes and has been reportedly looking for a partner to work with on an engine for 2021 and beyond.

Cosworth is also an option with Aston Martin working with the legendary engine makers on the Valkyrie.

As well as the ongoing success of Aston’s road car business, it has also seen plenty of success on the racetrack, winning the GTE class at this year’s Le Mans 24 hour race.

Would you like to see Aston Martin in Formula One? Let us know below...