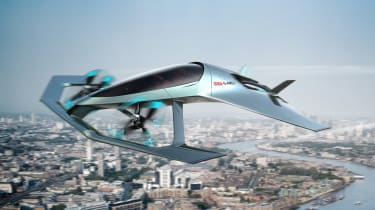 Once again, Aston Martin has turned its hand to a new form of transport, this time the British supercar firm looking to the skies.

• Aston Martin AM37: riding the waves in Aston's £1m powerboat

Revealed at the 2018 Farnborough International Airshow, the craft is purely a near future vision of personal luxury air travel and there are no plans to make it as of yet. As such, it features plenty in the way of futuristic propulsion technology, and is autonomous. 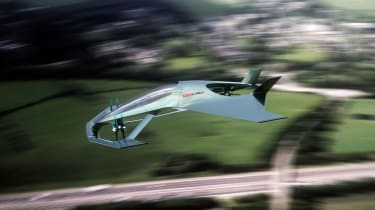 The Volante Vision Concept boasts room for three in its cabin in a 1+2 configuration, covered by a fighter jet style canopy. Aston Martin has styled the rest of the craft, with influence from the Valkyrie spotted in the front wing element.

The Vision Volante Concept features a gas turbine hybrid propulsion system created by Rolls-Royce, plus a tri-rotor propeller setup to enable VTOL capabilities. An on-board battery pack even means it can do short trips on electric power only.

“The study would lead us to a craft that would be able to do London to Paris non stop in about an hour. As the crow flies that’s about 200-250 miles, at a speed of about 200mph. Birmingham to London could be done in half an hour.”

Explaining Aston’s desire to create the concept, teaming up with Cranfield University and Rolls-Royce, Sproule explained: “We’ve all got an interest in next generation mobility and low altitude airflight.

“Marek Reichman, [Aston Martin Executive vice president and chief creative officer] and I went to see Cranfield about 18 months ago as we saw this as an emerging area of luxury mobility. They introduced us to Rolls-Royce in terms of propulsion systems. 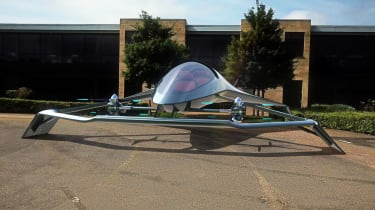 “Their heritage in VTOL systems is quite strong. They did the Harrier system and they currently do the system for the new F-35 Lightning which has just started service with the air force.”

Though it’s strictly a concept for now, the Vision Volante wears the government’s Britain is GREAT branding, suggesting hopes of more to come from the project.

“If something came together from this in terms of production, it would jobs and new technology and so and on” Sproule explained.

Will the flying car market ever take off? Take a look at some of the best flying cars and concepts...