How do you win at Le Mans? Aston Martin explains all ahead of 2015's race 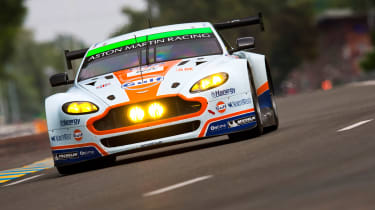 The Aston Martin racing team, run by the Banbury-based Prodrive organisation, has taken class wins at the French 24-hour classic in 2007, 2008 and 2014, so those involved know a thing or two about taming the event’s significant challenge. Auto Express sat down with the team in the paddock at Le Mans to find out just what it takes.

The first element is selecting a car, and in the current era Aston runs in the GTE class for production-based cars with a race-prepared version of the V8 Vantage coupe. “It’s the smallest and neatest bodyshape in the range and the sportiest car Aston produces,” explained the team’s managing director John Gaw. “But in road-car form, it’s not as close to the performance level the organisers want for the class, so we’re allowed to make some changes to put us on a relatively even footing with the competition.” 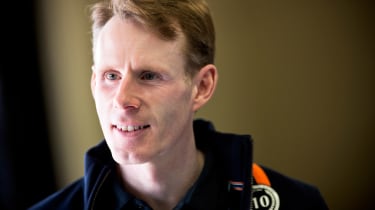 In standard form, the Vantage is a relatively high-drag car, so the team has to run lower downforce to compensate, making it trickier to drive under braking and in high-speed corners. The high drag also results in increased fuel consumption, so the Aston is allowed run with a larger fuel tank than others in the class to compensate.

With the car selected and prepared, the next element is the human factor - the drivers. And even though the race lasts a full 24 hours, the generally better reliability of contemporary racing cars means the days of cruising to the finish to avoid a breakdown are over. “The level of competition means we have to go flat-out every laps,” says Rob Bell, who co-drives the #97 Aston with Darren Turner and Stefan Mucke. “There’s maybe one or two kerbs we’d stay off that we’d be hitting in qualifying or a shorter race, but it’s pretty full-on. If we’re in a bunch of cars circulating at roughly the same pace, we may decide to stay where we are and not risk an overtake, as they’ll only be attacking us again at the next corner and that loses us both time. The only time we’d back off a little is if we have a comfortable lead towards the end.” 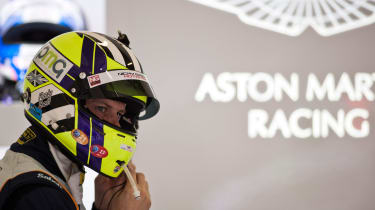 • The importance of tyres at Le Mans

As you’d expect, success to a large degree revolves around good preparation. Gaw explained that the work for the following year’s race begins the morning after the previous year’s won. “When we go back to the workshop next week, the first parts for next year will be on the table.” That preparation also encompasses the engineers considering every possible eventuality during the race, and the drivers fine-tuning the car to their liking in practice and qualifying sessions.

“We’ll run through the different downforce levels and different spring and damper settings to dial the car in. We may not necessarily set it up for the fastest possible lap time - it’s got to be comfortable and stable to drive over the full 24 hours,” says Stuart Hall, who shares the #96 car with Roald Goethe and Francesco Castellacci. Gaw added that the team will also be looking at how long the brakes will last so they can anticipate when they’ll need changing during the race and how long the drivers can make a set of tyres of last. 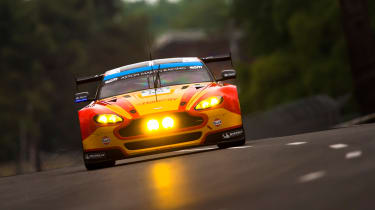 Once the race is underway, the drivers and indeed every member of the team are looked after by John Camilleri from the team’s Driver Performance division to make sure they’re at peak performance throughout. “During the year, I look after fitness testing, training and planning exercise programmes,” he said, “but on-event it’s all about warm-up strategies to get the drivers’ heart rates up before they get in the car. I also ensure the hydrated and fed correctly for optimum energy.” Over the course of 24 hours, each driver will drink around 12 litres of water.

This year Aston Martin is trialling a system in the #96 car that will feed live data on the drivers’ heart rate, energy levels and breathing back to the pits, giving their trainer the same kind of information the engineers get about the car. In the cockpit, race organiser the ACO mandates a maximum cockpit temperature of 32 degrees - and the team runs as close as it can to that mark, as the mandatory air-conditioning system naturally saps engine power. One of Aston Martin’s partners, solar energy company Hanergy, is trialling a system to power the air-conditioning with solar film on the car’s roof, to eliminate this trade-off.

When a driver gets out of the car after a typical two-hour stint, the aim is to get them out of their kit, massaged and rested as quickly as possible. “The first few times you do a 24-hour race, it’s hard to switch off when you get out of the car,” says driver Darren Turner. “But you realise there’s nothing you can do to influence things once you’re out, so after a quick debrief with the engineers, you develop a personal routine to switch off and wind down.”

While the drivers will sleep between stints and the mechanics usually have a chance for a cat-nap on chairs in the garage, three people on the team for each car get zero sleep from Saturday morning to Sunday evening - the race, data and engine engineers, who have to follow and monitor the progress of each car throughout the race. 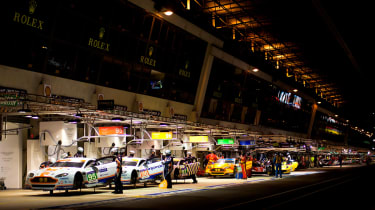 “We set up a ‘performance zone’ where they can focus on what’s happening and make decisions in a calm environment with as few distractions as possible,” says Gaw. “Ultimately, success in the race will depend on our people performing at the highest level and making the right calls if it rains or a safety car comes out. Individual performance is the defining factor.”

Motorsport fans will definitely want to read our Goodwood Festival of Speed 2015 preview.