The Aston Martin Rapide E is ready for production, offering 602bhp and a claimed range of more than 200 miles 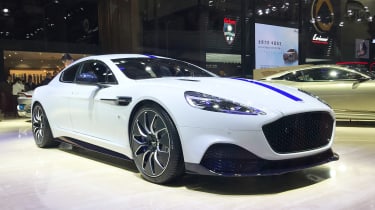 This is the Aston Martin Rapid E, the first all-electric car from the British luxury marque, which has made its debut at the Shanghai Motor Show. As the name suggests, the new model is a reworked version of the firm’s existing petrol-powered saloon, fitted with a new battery-electric powertrain. It’s on sale now, although production is being limited to just 155 units.

In place of the conventionally-powered Rapide’s 6.0-litre V12 drivetrain sits a 65kWh battery pack, feeding power to a pair of rear-mounted electric motors. These develop 602bhp and 950Nm of torque, allowing a sub-four-second 0–62mph time, a 50–70mph sprint of just 1.5 seconds and a top speed of 155mph.

The Rapide E’s 800V architecture allows its 65kWh battery to be recharged at a rate of 310 miles per hour on an 800V outlet delivering 100kW or higher. A more conventional 400V 50kW charger will add around 185 miles per hour connected. Aston Martin says it is targeting an official range of more than 200 miles on the tougher WLTP testing regime. 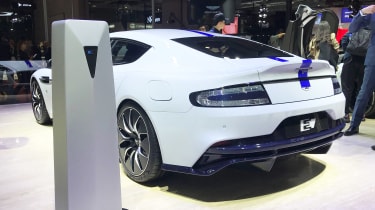 Aston has redesigned the Rapide’s styling for its all-electric reincarnation. Updates include a new honeycomb grille, a reworked front splitter, a new undertray, an updated rear diffuser and a set of aerodynamically efficient alloy wheels. Aston says these updates have been designed to minimise drag and increase range, and that they deliver an eight per cent improvement in aerodynamic efficiency over the petrol-powered Rapide.

We’ve yet to hear how the Rapide’s construction has been altered to accommodate the electric motors and considerable weight of the batteries. Aston says the car has "strict weight targets" which it has met through judicious application of carbon-composite materials. The car also has reprofiled spring and damper settings, to cope with the extra bulk.

Inside, the Rapide E gets a new 10-inch digital gauge cluster in place of the V12’s analogue dials. It displays EV-specific information such as regenerative performance, real-time energy consumption and the battery’s state of charge. Carbon fibre is also liberally used throughout the cabin - again, in a bid to meet Aston’s strict weight targets.

Dr Andy Palmer, President and Group CEO of Aston Martin Lagonda, commented: “Unveiling the Rapide E will be a huge moment for Aston Martin. As our first all-electric production car, it is a truly historic step - one that signals Aston Martin is prepared for the huge challenge of an environmentally responsible and sustainable future.” 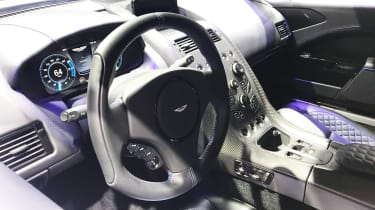 Several British engineering firms, including Williams Advanced Engineering and Xtrac, have joined forces with Aston to assist on the Rapide E's development. Owners of the car will be part of an ongoing programme, supplying feedback to influence Aston's future electric cars - including the forthcoming Lagonda models.

The new Rapide E will be the first all-electric Aston Martin built at the firm’s new facility in St Athan, Wales, where it will be manufactured alongside the conventionally powered DBX SUV. No official price has been announced for the car, but Auto Express expects it will cost around £250,000. First deliveries are expected in autumn this year.

Click here for all the latest from the 2019 Shanghai Motor Show...