The Vantage has a roomy cockpit and an excellent boot, so it’s surprisingly practical 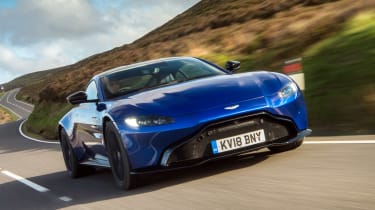 It’s probably safe to say that, if you’re looking at two-seater sports cars, then you’re not expecting SUV-like luggage-lugging capabilities. However, even a sports car needs to have decent accommodation and space for a bag or two. The good news is that the Aston Martin Vantage passes muster here, although it’s a strict two-seater and doesn’t have the occasional four-seat practicality you get with a rival such as Porsche’s 911.

However, the cockpit is very comfortable for two, with the seats offering plenty of adjustment and enough headroom for taller drivers. In its most comfortable Sport mode, the Vantage also rides well and wind noise is muted until you’re travelling at speeds far above the motorway speed limit. There is a little tyre roar, but this is something that affects virtually every car in this class.

While the Vantage is just a two-seater, it does have a usefully sized boot, with a 350-litre capacity – about the same as an average hatchback. It is a slightly awkward shape, though, and soft bags will make far more of the available space than rigid suitcases. Additional storage space is available on a shelf behind the front seats. 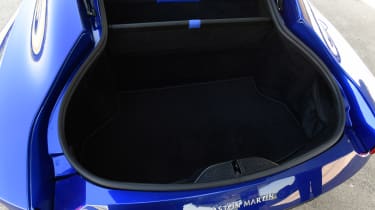 At 4,465mm long, 1,942mm wide and 1,273mm high, the Vantage has broadly similar dimensions to models such as the Porsche 911, Audi R8 and Mercedes-AMG GT. The AMG is slightly longer and the Audi is very slightly shorter, but the Porsche scores points for being not quite as wide as the other models mentioned here. At nearly two metres wide, the Aston car be a daunting prospect to thread through tight city streets and width restrictions.

As the Aston Martin only offers accommodation for two people, it will come as no surprise that the driver and passenger are very well catered for. The standard sports seats are very comfortable and offer electric adjustment and a memory function, while the steering column is manually adjustable, too.

Drivers up to six feet six inches tall should be able to find a comfortable driving position with ample head room. One omission is a glovebox, which some drivers may find irritating, but the door pockets are decently sized and there’s a central storage area between the seats, too.

With a capacity of 350 litres, the Vantage’s boot is quite generous for the class and equalled only by the Mercedes-AMG GT. Mid- and rear-engined rivals such as the Audi R8 and Porsche 911 have much smaller ‘boots’ at the front of the car, and the Porsche has the option of using the rear seat area for additional baggage capacity.

While the Aston’s boot is a similar size to a family hatchback’s, it is awkwardly shaped and you’ll need to use soft bags to make the most of its capacity – or you can invest in the set of Aston Martin tailored luggage on the options list. The boot lip is high, too, so putting heavy cases into the boot may feel awkward.