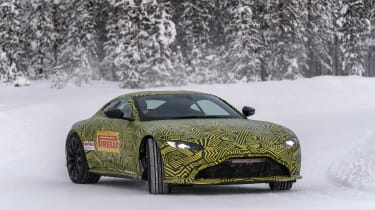 The new Aston Martin Vantage is a huge leap on from its predecessor; even on snow, this much is clear. The engine is explosively potent, and even in low-grip conditions Aston’s work on the chassis and the balance it brings is palpable. We’ll have to wait until a drive on tarmac to give a definitive verdict, but the signs are extremely positive.

The Aston Martin DB11 brought the British marque’s GT cars bang up to date – but arguably this new Aston Martin Vantage is even more important.

In the sports car class that the Porsche 911 has had sewn up for so long, the new Vantage could blow the market wide open, and we’ve already had a chance to sample its firepower.

With the continuing tie-up between Aston and Daimler, the Vantage uses a 503bhp 4.0-litre twin-turbo V8 usually found in potent AMGs – only here it’s hooked up to a regular eight-speed auto compared with the seven-speed dual-clutch used in most Mercedes. 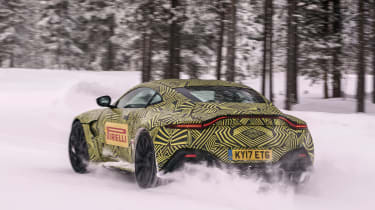 On hand to explain why is Aston’s chief engineer – vehicle engineering, Matt Becker. “With a dual-clutch you sacrifice low-speed driveability,” he says. “This is a sports car, but it’s still an Aston and it still has to be refined.”

The Vantage shares the same basic structure as the DB11, but 70 per cent of the components are new, which saves 20kg over its predecessor. The brake system has been tailored to the Vantage’s size and weight, and the calibration of the dampers is bespoke. There’s an E-Diff electronically controlled limited-slip differential, too, which is a first for any Aston Martin. 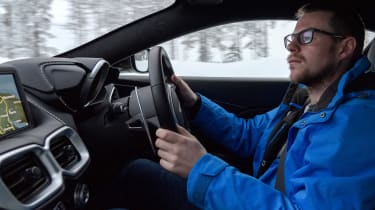 With all that power and 685Nm of torque spread wide between 2,000 and 5,000rpm, the Vantage slews sideways on the snowy, icy test route our drive is limited to. But even in these low-grip conditions, there’s a sense of balance and connection here. The throttle map feels progressive and, coupled to the predictability of the way the E-Diff locks up, there’s clearly a precision to the way the Aston responds.

It’s difficult to get a sense of true steering feel or weight on snow, but with a linear-rate set-up the Vantage turns quickly and, yes, predictably. It sounds great, too, thanks to a wickedly bassy soundtrack when the sports exhaust is in Track mode. While a snow drive can’t give us a definitive verdict on where the Vantage stands in relation to the 911, on first impressions, Aston’s new baby could have what it takes.