Audi PB18 concept could make production if designers have their way 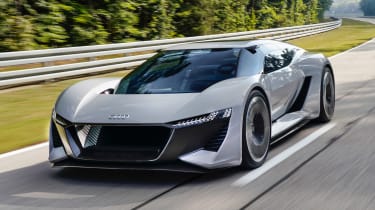 The Audi PB18 concept could make it into production as a flagship electric supercar, bosses have hinted.

The concept was first revealed at the Pebble Beach car show in the summer and takes inspiration from both the brand’s former LMP1 racers. Measuring 4.53 metres long, 2 metres wide and 1.15 metres tall, the PB18 e-tron has the cab-forward design of the Audi R8 but features extended bodywork to give it the appearance of a shooting brake.

Speaking at the LA Motor Show Audi’s head of exterior design, Andreas Mindt, told us he wants to see the car put into production. “We are pushing like hell, believe me – we are the engine in this, we want it,” enthused Mindt. 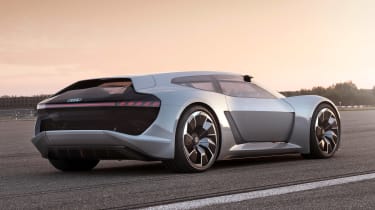 If given the green light the PB18 would offer a level of performance above that of an Audi R8. Mindt added: “I believe all the electric cars from performance point of view will sit above everything.”

The PB18 is powered by a 95kWh solid state battery that drives three electric motors: one on the front axle and two on the rear. Combined, they produce 671bhp and 830Nm of torque. With drive sent to all four wheels, the PB18 e-tron is claimed to cover the 0-62mph sprint in just over two seconds. Each of the rear motors directly drives one wheel, which allows near-instant torque vectoring characteristics.

• Fastest electric cars in the world

Weight is the enemy of any E, however, the use of aluminium and composites in the PB18’s construction means that the overall weight is expected to dip below 1,550kg - or lighter than the rear-wheel drive Audi R8 RWS.

The concept features an active rear diffuser and spoiler to help deliver downforce when on track, while the bonnet - which creates a bridge between the wheel arches - takes clear cues from motorsport, too. Not only does the open space smooth the flow of air at the front, but gives the driver a view of the road directly ahead.

The long shooting brake-style back end sets the PB18’s profile, and gives an entirely un-supercar-like 470 litres of boot space. That’s almost what you get from an Audi A4 saloon. 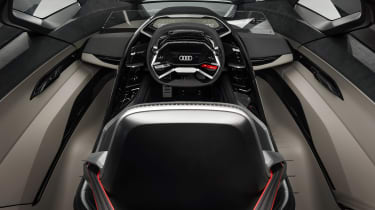 As standard it operates as a two seater; but when driven solo on track the driver's seat, wheel and pedals can slide electrically into a central position - made possible by the fact that there’s no mechanical connection to the drive controls. If you want to get out, the seat can move back to the side again.

Wherever the seat is positioned, the driver is presented with a transparent OLED screen ahead. As well as showing all the usual driving data, this can superimpose racing lines onto the windscreen when on track.

While Audi’s last EV concept demonstrated the most advanced self-driving tech, the PB18 is all about placing the human in control. There’s no autonomous add-ons to be found here, nor are there any other creature comforts that’d weigh the car down.