The Audi A1 Sportback is a more practical five-door version of the A1 supermini, designed to take on the MINI Clubman 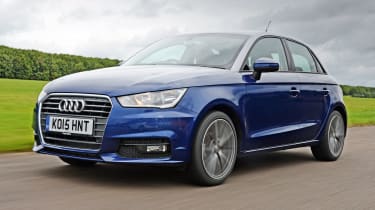 When the three-door Audi A1 was launched in 2010, it was only going to be a matter of time before a practical five-door joined the line-up. Audi lifted the wraps in 2011, opening up its smallest model to the style-concious family market – long before MINI offered it's stylish hatchback with an extra pair of doors.

All models get an upmarket interior with premium materials, as well as a 6.5-inch display and three-spoke sports steering wheel. The entry-level Audi is a hugely desirable model for buyers looking to downsize from the likes of the larger A3 or A4. The Sportback commands a premium of around £600, with a variety of TDI diesel and TFSI engines available. Trim levels consist of SE, Sport and S line, with the range culminating in the super-quick S1 Sportback.

The Audi A1 Sportback remains a small car with limited practicality, but an extra set of rear doors adds another string to its bow. It also makes it a feasible option for families with small children. It features a wide range of diesel and petrol engines, all turbocharged and with stop start. Audi expects the A1 Sportback to make up two-thirds of A1 sales.

More reviews for A1 Sportback

The car has been given a facelift for 2015, but you'd be hard pushed to tell the difference. The grille and lights have been tweaked, as well as the bumpers and some new alloy wheel designs. Inside, the A1 is largeky unchanged, too. It's under the bonnet where the biggest changes have been made - including the introduction of the VW Group's three-cylinder 1.0-litre engine also found in the VW Polo.

Under the skin the Audi A1 Sportback is identical to the three-door car, so it drives just as well. Its low weight and compact size make it agile in the corners, and an electronic differential that's fitted as standard gently brakes the wheel with least grip, so it resists understeer well and grips hard when you apply the power.

As of late 2014, diesel fans had their options culled to a single 1.6-litre TDI. However, while it's smooth and punchy, it doesn't feel particularly sporty. Petrol options include the brilliant 94bhp 1.0-litre TFSI and a 1.4 TFSI with either 123bhp or 148bhp – all of which can be ordered with a twin-clutch seven-speed S tronic gearbox. These engines feel eager to rev, produce an growl from the exhausts and suit the A1’s character far better than the diesel. 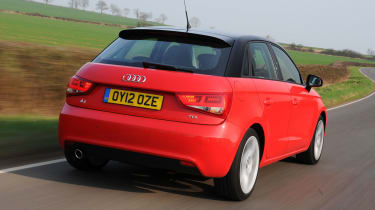 Compact dimensions, light controls and decent visibility ensure the Audi is easy to manoeuvre in town. Head out on to the open road and you’ll find wind and road noise are reasonably well suppressed, but the drone from the diesels is a little intrusive on the motorway.

Just as distracting is the stiff ride, which causes the car to thump over bumps and potholes. Matters improve at speed, but the A1 still fidgets over poor surfaces. It’s possible to specify the softer SE specification at no extra cost, but even this has a firm edge.

The upshot of the Audi’s stiff ride is strong body control with agile and composed handling. It’s nowhere near as engaging as a MINI, but the A1’s steering is precise and well weighted, plus there’s strong grip.

Stop-start is standard across the A1 Sportback range, and the cleanest model is the tax-free 1.6 TDI with a manual gearbox. It'll return fuel economy and CO2 emissions of 80.7mpg and 92g/km respectively, with the still-impressive auto doing 76.3mpg and 97g/km for free road tax. Even the hot S1 will boast around 40mpg.

The cleverest engine by far though is the 148bhp 1.4 TFSI which features a development of the system already seen on the Audi S8’s 4.0-litre V8. It can shut down two of its four-cylinders on light throttle loads, saving around 5mpg of fuel – the result is 58.9mpg and 111g/km of CO2.

Private buyers will be pleased, as the A1 Sportback is predicted to retain a healthy 55.1 per cent of its new value after three years. Servicing prices are competitve, too, as Audi offers a five-year maintenance plan for just £250.

It’s been around for a few years, but the A1’s classy kerb appeal remains undimmed. All the trademark Audi styling cues are there, including the gaping front grille, swept-back headlamps and clamshell tailgate. All models get alloy wheels and a body colour finish for the door handles and mirrors, while models further up the range receive larger alloys and extra chrome trim.

As with one of its main rivals the MINI, there’s plenty of scope to personalise your A1. For instance, a contrasting roof colour can be added, while there are a number of different bodykit options. However, it’s inside that you’ll find the greatest opportunity for customisation.

Everything, from the colour of the seat trim to the surrounds for the eye-ball air vents, can be colour-coded, while the £2,695 Audi Exclusive option covers the seats, steering wheel and gearlever in fine Nappa leather.

Yet even if you steer clear of the options list, the Audi’s cabin oozes upmarket appeal. The slickly designed dashboard looks modern, while the quality of the materials is first rate. Neat details include the tactile, knurled aluminum air-conditioning and audio dials, plus the eye-catching aluminium trim used throughout the cabin.

Thanks to an extra six millimetres in height and six millimetres in width, the A1 Sportback has a little extra headroom and legroom compared to the three-door A1. All UK cars come with five seats as standard, but don’t expect masses of space in the back - tall adults will still find it a squeeze to sit behind one another. 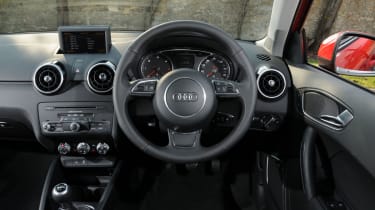 Boot space is on a par with the three-door – so that means 270 litres of space with the rear seats in place and 920 litres with them folded flat. You can adjust the height of the boot floor too, to either maximise space or raise it up to create a perfectly level loading lip. There are a number of hooks for shopping bags, too.

Despite its upmarket image, Audi hasn’t always had the best reputation for reliability. Yet recent improvements saw the brand climb to a respectable 12th place overall in our Driver Power 2014 survey. And while the A1’s ranking of 63rd isn’t much to write home about, it does represent a remarkable 32-place jump up the charts from 2013.

All A1 Sportbacks come with ESP and six airbags as standard. There have been no major recalls on the three-door version of the A1, and seeing as the Sportback is based on the same platform and uses the same engines, it’s a similar story here.

More on A1 Sportback 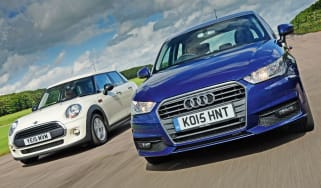 Premium superminis prove small needn’t mean basic, with Audi’s new 1.0 turbo A1 the latest arrival. We see if it can topple the MINI
New Audi A1 2015 facelift review 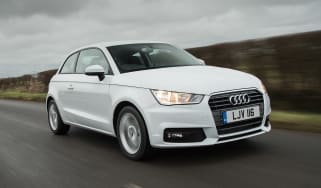 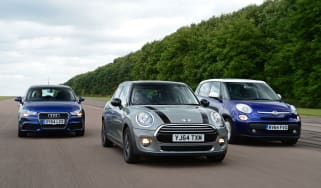