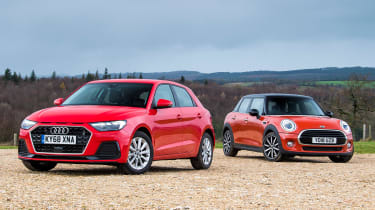 British buyers love superminis, because they often serve up decent boot and passenger space but are compact and can be fun to drive – plus they’re easy to park.

Upmarket offerings such as the Audi A1 and MINI carry features down from more premium segments, yet they retain small dimensions and low running costs. The new Audi A1 aims to bring tech from the brand’s high-end models and blend it with a compact, stylish body at an affordable price.

But it has tough competition here, because our favourite car in this class has plenty of appeal in those areas and is great fun to drive. With a new platform and some advanced tech, then, can the latest A1 take on the MINI and win? 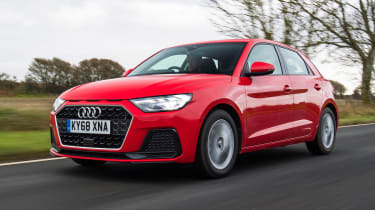 For: Lots of cutting-edge technology, sharp looks, interior feels more spacious than the MINI’s.Against: Doesn’t offer much more than a VW Polo, not as good to drive as the Brit.

Audi has completely overhauled its A1 supermini. It’s now based on the VW Group’s MQB A0 platform and features a new exterior look, a refreshed cabin design and plenty of up-to-the-minute technology.

You’ll notice the Audi’s striking new grille and front bumper straight away, while the rest of the car apes this with a typically evolutionary design. On the inside there’s a simple, clean layout with some soft-touch materials used in key places.

More reviews for A1

However, some cost-saving hard plastics are still to be found in key areas like the doors, and the design is much more plain than its competitor. The upgraded infotainment system (part of the £1,650 Technology Pack) on our test car is superb, though, and really helps the Audi stand out from its rival, even with the MINI’s own optional system fitted. 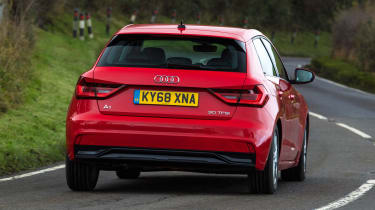 Still, one of the Audi’s biggest flaws is the cabin, because it doesn’t have the upmarket air of the MINI on the inside. Despite its higher list price, in certain areas the A1 looks and feels similar to the cheaper Volkswagen Polo, while the MINI has a unique and interesting design that helps to justify its premium price.

The other thing that sets the two apart is the way they drive. The MINI is more fun than the Audi and its more sophisticated-feeling chassis makes the car seem more playful, without losing any maturity.

It’s not that the Audi is bad to drive; it has direct steering, good grip and a decent gearchange. But it misses out on the MINI’s entertaining balance, more involving steering and great driving position. 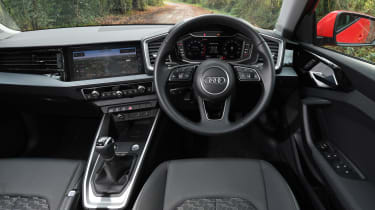 It also doesn’t ride as well as the British model. It fidgets over harsh surfaces and isn’t as smooth around town, either. This lumping and bumping means the Audi isn’t as settled as its competitor.

The engine has a power disadvantage, too, but the A1’s low kerbweight of 1,105kg and shorter gear ratios helped it against the 1,160kg MINI.

The Audi’s engine is also a little quieter than the MINI’s three-cylinder unit when revved, although it doesn’t sound as sweet so it’s less characterful.

Infotainment: Optional 10.1-inch touchscreen display uses similar interface to latest Audi A6 and A7 models; it works really well and looks very upmarket in a supermini.

Virtual Cockpit: 10.25-inch digital display instead of analogue dials is useful and adds to the A1’s hi-tech appeal.

Materials: Material quality isn’t as solid as in the MINI, because some of the plastics look cheap and the design is simpler. 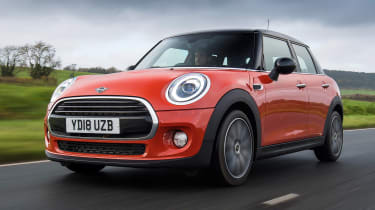 The latest version of the MINI Cooper was launched last year and features new LED lights and some more kit. MINI also overhauled its trim line-up as part of the update, so it’s more traditional than before; Cooper refers only to the car’s engine (a 134bhp 1.5-litre three-cylinder petrol), and the trim level choice is now Classic, Sport or Exclusive.

Engineers didn’t need to change much with the updated MINI, because it was already among the best drivers’ cars in its class. In both three and five-door form the baby Brit is a delight from behind the wheel, thanks to quick and direct steering, lots of cornering grip and a punchy engine.

Our car came with the £600 adaptive suspension upgrade, which means you can switch to the Sport setting for stiffer damping, although changing driving modes doesn’t make that much difference. That’s not too much of an issue because in the default setting the well-judged suspension set-up allows enough compliance to retain composure so as not to feel unsettled on rough roads. It’s much better than the A1 here, offering better handling as well as a more comfortable ride. 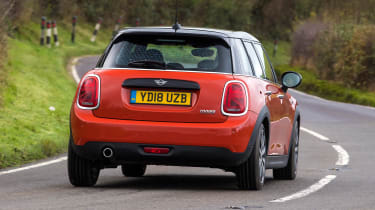 It’s also more powerful than the Audi, with 134bhp to the A1’s 114bhp, and so it was quicker from 0-60mph and 30-70mph through the gears than its competitor in our tests, taking 9.1 and 8.9 seconds respectively. The A1 posted times of 9.6 and 9.2 seconds in comparison, although the lighter weight and shorter ratios helped it in gear.

The MINI took 9.5 seconds to go from 50-70mph in fifth, which was a bit slower than the 9.2 seconds recorded by the Audi over the same assessment, although the outcome was reversed in this test in sixth gear.

The superb chassis and extra power help to justify the MINI’s premium price tag, and its case is also helped by its upmarket interior. Inside, this car looks like no other; the design is individual, uses good-quality materials and fits the charming exterior look well. That’s in contrast to the A1’s interior, which, while functional, is very similar to that of its VW Group sibling, the cheaper VW Polo. 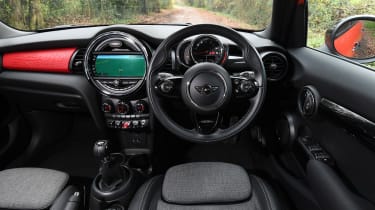 However, the MINI isn’t as well equipped as the Audi. You’ll need to add a £2,000 Navigation Plus Pack for an 8.8-inch touchscreen display, something that’s standard on even entry-level A1s. But the MINI is around £2,000 cheaper than the Audi in the first place (in Classic form as tested), and also gets sat-nav and connected services.

Infotainment system: MINI has an 8.8-inch sat-nav screen, slightly smaller than the Audi’s unit, but it provides less functionality. We wish Android Auto were available, although Apple CarPlay is on offer.

Customisation: MINI offers fully-customisable inserts for the dashboard and side scuttles. This is the car we are running on our fleet, so we decked it out with a bespoke Auto Express dash insert. 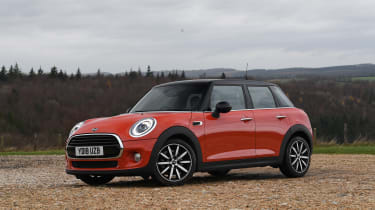 The MINI stands out thanks to its brilliant handling, composed ride, distinctive interior and stylish design. It beats the A1 because it better justifies its premium price tag. Despite several expensive option packs, it’s also more affordable, especially if you can do without certain extras. 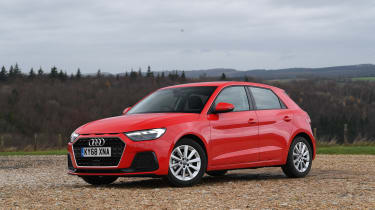 The new Audi A1 scores highly for in-car tech, but ultimately loses out to the MINI. It’s not as much fun to drive nor as comfortable, so doesn’t justify its price as well – particularly because the cabin doesn’t feel as premium or upmarket as the MINI’s, aside from the great infotainment system.