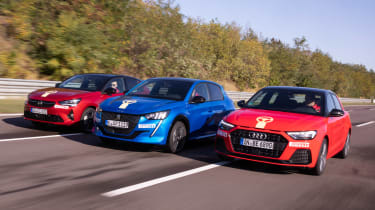 Never ones to miss an opportunity, our judging session for sister title Auto Bild’s Golden Steering Wheel Awards presented us with both the new Corsa and it’s new sibling the Peugeot 208, plus one of the premium models it’s aiming at in the supermini sector, Audi’s A1. So it would seem rude not to compare the three, wouldn’t it?

Although the Vauxhall and Peugeot share much (chassis, engine, gearbox, electrical architecture, dimensions), the two cars have very different looks and feel quite different, too.

Put simply, the Vauxhall is the more sporting of the two, while the Peugeot feels posher and plusher. It’s 3D digital dash display gives it a tech advantage, too.

The cleaner looks of the Vauxhall on the outside are mirrored inside where a more minimalist approach has been taken to the dash. The touchscreen infotainment screen sits lower down, meaning the Peugeot gets a touch more oddments space below its row of smart looking toggle switches. However, you have to delve into the 208’s touchscreen menu to adjust the heating or ventilation settings, where the Corsa gets simpler to use knobs and buttons. 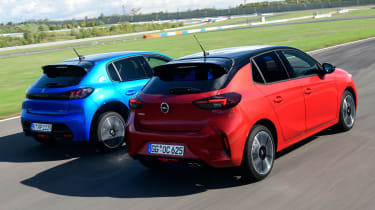 The Peugeot’s digital dash is a lovely thing, though, while the Vauxhall’s looks a little small and odd by comparison. However, the old Peugeot i-Cockpit foibles have returned and, depending on your height and driving position, you might find some of the info on the display hidden by the low-set, small steering wheel. It’s a lovely wheel to hold, though.

Quality-wise the two are on par with each other; nice soft-touch plastics sit on top of the dash, but not on the doors.

Stepping into the Audi, though, takes things up a notch. The design sits nicely between the two – missing the flair of the French car’s design, but with a more premium look and a little more interest than the Vauxhall’s. And much as the quality is impressive in the two PSA group cars, the Audi just takes it up a notch although it still has harder plastics on the door tops.

The clarity of the digital dash and infotainment screen is better, while the precision of the controls just feels slightly better engineered – it just feels more, well, Audi. You get what you pay for, though – comparing the price of our three German test cars in Euros and the Audi costs around €8,000 more than the other two. 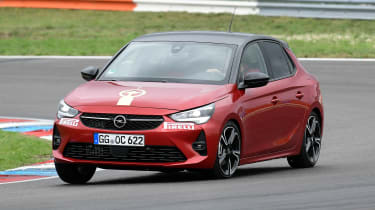 So you get more quality and better all-round visibility in the A1, even though you feel as though you sit a little lower, but you have an old-fashioned handbrake rather than the electrically-operated parking brake in the other two cars.

We’ve already been critical of the access and space in the back of the Corsa, while the 208 offers similar room but slightly better access due to a wider door aperture. It’s a win for the Audi here, then – it’s easier to get into the back and there’s a touch more space there, too.

Like the PSA siblings, the Audi gets a three-cylinder engine, but it’s only a 1.0-litre rather than the 1.2s in the Vauxhall and Peugeot. Its 114bhp is down on the others’ 128bhp, but it doesn’t feel that much slower out on track.

The A1’s automatic gearbox also misses the eighth gear of the Peugeot and Vauxhall, but they’re all nice to use and shift smoothly – we wouldn’t blame you if you decided to take the auto route. 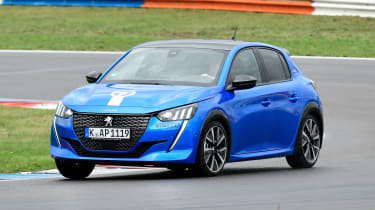 When it comes to the stopwatch, the A1’s 0-62mph time of 9.4 seconds is only slightly slower than the identical 8.7 seconds for the Corsa and 208, the Audi’s lighter weight off-setting its power deficit. However, the PSA models promise better fuel economy of around 9mpg.

On our track-based test, the differences between the Corsa and 208 are marginal, but clear – the Vauxhall is the sportier of the two. Body control is better and the ride is a little firmer, which makes the car feel slightly more responsive.

As with the look and feel of the 208, its dynamics are plusher, too. It rolls more through corners, but felt more settled when we went looking for bumps.

Both cars can get steering and throttle response beefed up by selecting Sport mode, which also pipes an artificially-generated exhaust note into the cabin that actually sounds pretty good. 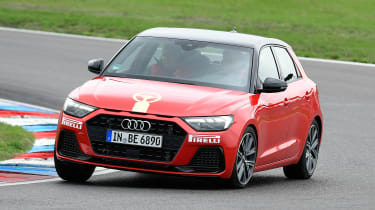 The Audi sits in between the two and offers the best balance of ride comfort and body control. It’s steering is the nicest of the trio, too.

All the benefits of the Audi are offset by its high price, which makes it difficult to justify when both the Corsa and 208 are so good, too.

Whether you should go for the Vauxhall or Peugeot really depends on whether you fancier the sportier look and feel of the Corsa or the slightly more laid back feel and more stylised 208. Then it comes down to the deals that either brand has on offer as the cars launch in the coming months.

However, what we do know is how tough the competition is and both the Corsa and the 208 are going to have their work cut out to beat our current favourite supermini, the Renault Clio.