The sixth-generation Vauxhall Corsa has arrived in Britain, but does its price hold it back in such a competitive sector? 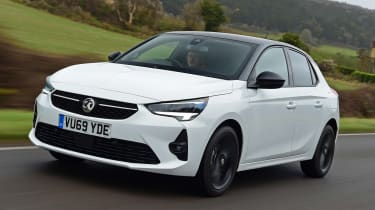 As a package, the new Vauxhall Corsa represents a quantum leap over the old one, and that’s before we’ve even had a chance to properly assess the all-electric version of the brand’s big seller. It’s miles better to drive than before, the tech is bang up to date, and the turbocharged petrol motor is one of the best small engines out there. But the sticking point is the price; monthly PCP deals aren’t that attractive, meaning the case for the Corsa isn’t as enticing as we’d hoped.

The curtain falls on 2019 with the launch of what will likely be one of the best selling cars in Britain next year. It’s the new Vauxhall Corsa, and while much of the news about this newcomer has majored on the fact that an all-electric version is just around the corner, the first of these big selling superminis will stick with petrol and diesel power – albeit taken from a new source.

That’s because the latest Corsa is the first Vauxhall to really benefit from the brand’s new PSA parent company. Taken under the wing of the French giant in 2017, Vauxhall’s sixth-generation Corsa has had a rather difficult birth. Midway through development, the decision was made to switch the car onto PSA underpinnings, introducing the CMP platform used under the new Peugeot 208 and scrapping the chassis work Vauxhall had already carried out on its own.

Irrespective of the changes under the surface, we’re told that the new Corsa was always going to look like this on the outside, and it’s quite a transformation from the fifth-generation model. The bonnet is longer, and the windscreen doesn’t jut out towards the front axle as it did before, meaning a shorter dashboard. The roof sits 48mm lower at its tallest point, while all the surfacing stretching round to the tailgate changes significantly. Furthermore, every model gets LED headlights as standard. 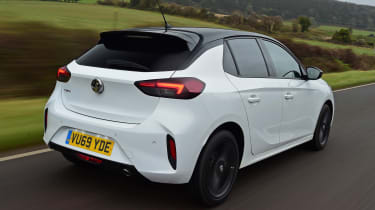 Mechanically, one of the main benefits of the last minute switch to the PSA platform – alongside the pure-electric possibilities – is the weight saving. Depending on spec this new Corsa is up to 108kg lighter than before. The platform is 15 per cent stiffer, too, while SRi model cars like the one we tested get more bracing at the nose, to aid turn-in and agility.

From behind the wheel the difference between old and new is worthy of high commendation, but this new Corsa is not without some of the downsides we’ve found in some of its new Peugeot siblings. It certainly feels light on its toes, and while the chassis is not up there with the new Renault Clio or the Ford Fiesta for outright fun, there’s a nimbleness to the Corsa that was sorely lacking before.

The front end of the Corsa is keen to tuck in quickly. There’s perhaps a bit more body roll than some of the sportier superminis but the ride isn’t any more supple, sitting just on the right side of firm. 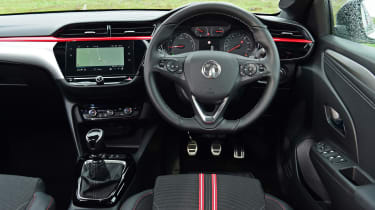 The steering is very light and the additional heft promised by toggling the Sport drive mode button never really arrives. The fake, but inoffensive engine noise pumping out of the speakers is much more noticable in this setting, too. In fact, the controls on the whole are light, and perhaps the most noticeable thing about the new Corsa isn’t that it’s better to drive than before, but easier.

The trademark, baggy, long-throw six-speed PSA gearbox really isn’t the sharpest transmission out there, but the 1.2-litre three-cylinder turbocharged petrol engine under the bonnet is brilliant. The 99bhp figure is bang on what you’ll find elsewhere in the big selling superminis, but the 205Nm of torque is a step beyond what many rivals can muster.

Combine this with the Corsa’s crash diet, and that 9.3-second 0-62mph time isn’t to be sniffed at. It pulls strongly towards 5,000rpm and feels much faster than a similarly powered new Clio. Yet while the Corsa may boast an extra gear, it isn’t as refined as the Renault.

So while mechanically the new Corsa impresses, the interior doesn’t quite match this new car’s aspirations. A seven-inch touchscreen infotainment display lifted from Vauxhall’s new sister brands is familiar and still slightly flawed due to the reliance on touch sensitive areas, but at least all the heating controls are easy to use. The design of the dashboard changes but the level of quality in the materials doesn’t move the game on, and for the money, the Clio really outscores the Corsa in this area. 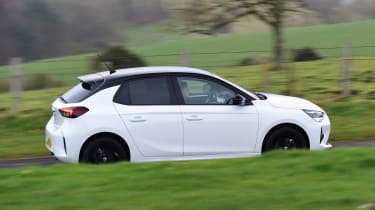 There’s also no three-door version this time around, but the rear doors are narrow, and rear bench space feels a little tight. You’ll find a decent amount of storage around the cabin, but the glovebox is small. Still, the boot expands to a generous 309 litres, which is a good size for the class, and the opening is wider than its predecessor’s, too.

Ultimately, the one major factor that’ll determine just how many new Corsas hit British roads next year is how much one will cost per month. On list price it’s much more expensive than before, but generally, Vauxhall’s PCP terms are pretty flexible and the brand is offering an £850 deposit contribution from launch.

It’s not enough, however, to thrust the Corsa into real contention as one of the best superminis to buy, especially when you could be in a Clio R.S Line for much less per month. That’s just about our favourite small car on sale right now, and the fact it’s more affordable is simply the icing on the cake.