We hit the road in the new Vauxhall Corsa to see if the 99bhp 1.2-litre petrol unit is the pick of the range

Make no mistake: the Vauxhall Corsa is a massive improvement over the car it replaces. Refinement is great, it’s tidy to drive, and the engine is a real gem. The lack of weight pays dividends not only for handling, but also for fuel consumption. However, while we’ll have to pit it against its rivals to be sure, it seems the Corsa can’t quite offer the value for money or interior quality of a Renault Clio, the practicality of a SEAT Ibiza, or the driving fun of the Fiesta. Regardless, it’s a solid all-rounder.

It’s pretty reasonable to suggest that the Corsa ranks higher than any other success story in the Vauxhall brand’s history. Since the first model went on sale in the UK 26 years ago (later than Europe - the Corsa A was our Nova), Vauxhall has sold a staggering two million of them.

Even though the previous version was getting a bit long in the tooth, it still managed to outsell any other model in the brand’s range by more than two to one and rank in the top four overall in UK sales this year. But now there’s an all-new model.

Last week, we had a chance to try the new Corsa on track, comparing it directly with both the similarly compact Audi A1, and a car with which it shares plenty under the skin, the Peugeot 208. But that model was powered by a 130ps 1.2-litre turbocharged engine that we won’t be getting in the UK. 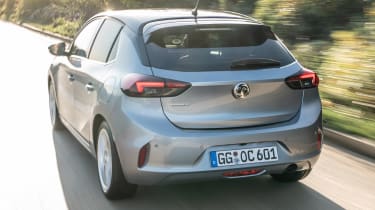 So now we’ve tried a petrol version that will come here. With 99bhp, it’s a less potent Corsa than the one we’ve already tried. But will anyone really miss the extra 29bhp?

Before we find out, let’s recap on some pretty significant changes at the brand. Vauxhall and Opel were bought by the PSA group back in 2017. The Corsa is the first fruit of the new relationship, sharing platforms, engines and safety tech with a variety of Peugeots and Citroens.

And it’s come at a good time, because the new CMP platform is bang up to date. It’s 40kg lighter and more than 15 per cent more rigid than the old car’s. It comes with all of the latest safety tech, so every Corsa comes as standard with lane departure warning with lane assist, speed sign recognition, and automatic emergency braking. And finally, it’ll accommodate not just combustion engines, but also a fully electric drivetrain. Due in early 2020, the Corsa-e produces 134bhp and delivers around 200 miles of range.

The result of CMP is that, out on the road, the Corsa is light years ahead of its predecessor to drive. Refinement was one of the old car’s strong points, but the new one feels so much more substantial, and so much better insulated. 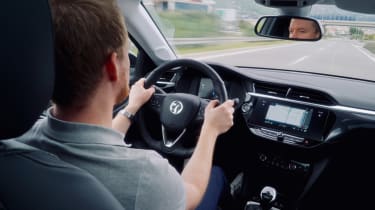 It rides slightly firmer, though. It’s by no means uncomfortable, but it’s now closer to a Ford Fiesta in terms of comfort, rather than the more relaxed set-up of the old one. Combined with a lighter weight - the new Corsa is roughly 10 percent lighter than the previous-gen car - it feels agile and responsive.

Despite this, it still doesn’t quite put a smile on your face in quite the same way a Ford Fiesta can. The steering has a lovely weighting and is precise, but there’s not much in the way of feel on offer.

This will be largely academic to many buyers, who will be far more interested in the fact that, thanks to that steering and well-matched control weights, the Corsa is so easy to drive.

So what of the engine? Well, it’s just as likeable here as it is in any other car we’ve tried it. Despite a modest output, performance is more than lively enough, while the power delivery is smooth and - hard acceleration aside - muted, too. If you think it’s a little too peaceful, then there’s always the SRI model which has a Sport button that boosts the sound through the interior speakers.

Another extra benefit of that lack of weight reveals itself at the pumps. On our Croation test route - which had little urban driving, but plenty of twisty roads - we averaged an indicated 47.9mpg. Lots of little efficiency measures add up. Active shutters in the grille open and close to improve aero efficiency (Vauxhall claims the drag coefficient of 0.29 is class-leading), while standard-fit LED lights save 0.7g/km of CO2 compared with old-fashioned halogen units.

It’s all the more impressive considering that, on paper at least, this engine is the least fuel-shy of the range. There’s a non-turbo version of the same motor - its 74bhp and 118Nm should be plenty for first time drivers - which does 53.3mpg, and a 1.5-ltre, 101bhp diesel which achieves 70.6mpg in the official WLTP testing procedure. However, the latter model is £1,210 more expensive than the equivalent petrol, so you’d need to cover serious miles to make the savings worthwhile. 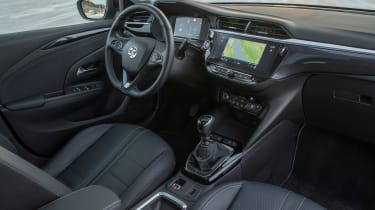 So from a driving experience, it’s good rather than great, but how does it fare elsewhere? Well, one downside is practicality. Vauxhall says that the Corsa is lower than the old car, and you can really feel that inside. Particularly in the back, where it’s nowhere near as spacious as a SEAT Ibiza or a Hyundai i20. At 309 litres, boot space is up 24 litres over the old car. It’s a decent figure, but the Renault Clio and, again, the SEAT, are more practical.

One of the downsides of the PSA tie-up is the adoption of its infotainment system. It looks pretty, but it’s not as slick as the set-up in a Volkswagen Polo. On the plus side, the Vauxhall has put its foot down when it comes to the climate controls - sensible physical switches remain, whereas the new 208 offers only touchscreen inputs.

Prices for the Corsa start from £15,500 for the base 1.2-litre petrol in SE trim. Standard equipment includes 16-inch alloy wheels, Apple CarPlay and Android Auto, air conditioning, lane departure warning and traffic sign recognition. But that’s over a grand more than the entry-level Clio, which has the same power and feels more expensive inside.