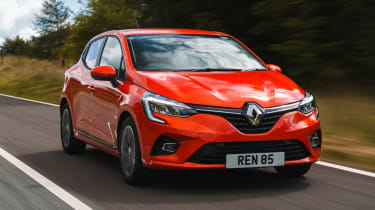 There’s a lot to like about the new Renault Clio. It’s behind only the Ford Fiesta for driving fun in the supermini class, but it feels like a better quality car than its key rivals in many respects. It looks competitive on list price and monthly deals, and we like the overhauled cabin and the level of equipment is strong, too. Only some slightly languid petrol engines let the package down.

The Renault Clio has been the best selling French car in the world since since 1990, if the brand’s claims are to be taken as gospel. Over 15 million Clios have hit the road since it launched, and over five generations it has established itself as a very popular sight on British roads.

This new one, on sale now and due on driveways up and down the land from next month, is aiming once again to take on the Ford Fiesta head on for pure driving fun in the popular B-segment supermini market. Renault has targeted improvements from a quality and practicality perspective, too.

While the exterior design is a mild evolution from the Mk4 car and there are clear visual similarities between old and new, this car is a totally new, and it even sits on a brand-new platform. Called CMF-B, this architecture has been developed for use across the Renault-Nissan-Mitsubishi Alliance and can already be found under the latest Nissan Juke.

A hybrid Clio is due next year and a hot Renaultsport version – while unconfirmed – is likely, too. From launch however, the new Clio arrives with three different petrol options and, going against the grain for cars of this size, a diesel as well. The most popular option, driven here, will the TCe 100 petrol. It uses a three-cylinder turbocharged petrol engine developing 99bhp and 160Nm torque, sending its power to the front wheels through a five-speed manual gearbox.

But before you even start the engine, you’re presented with this new Clio’s biggest step-change: the interior. Renault has majored on improving the cabin with an emphasis on higher quality materials, improved infotainment and more straightforward, user-friendly functionality – and it has succeeded. 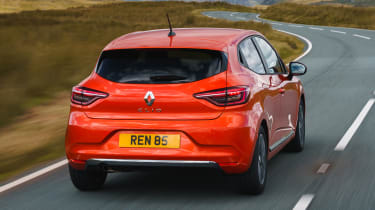 Iconic trim represents the middling spec in the new Clio range, but the dashboard and many of the touch points in the cabin are now made from much softer, plusher plastics. It’s not quite Volkswagen Polo quality, and you’ll still find hard and scratchy stuff if you go looking for it, but it’s certainly a big step towards it.

Space up front is good but the passenger seat sits tall. And while Renault claims an improvement in rear space, it’s still a little tight back there, and taller drivers will make the back row a squeeze for those behind them. The 391-litre boot is a very good size and the opening is wide too, but there’s a huge lip to contend with, which could make loading heavy objects a hassle.

In contrast to the subtly updated exterior, the design of the interior changes quite drastically. The dashboard is new, and formed around brand new infotainment system. All versions of the Clio feature a central display angled towards the driver, underlined by a row of rocker switches. 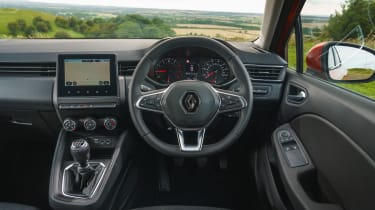 The basic Play model features a colour radio, but Iconic cars get a proper seven-inch display with Android Auto and Apple CarPlay. Step up to either S Edition or R.S. Line trim cars and the screen swells to 9.3 inches in a vertical tablet-style rotation. It’s technically better than the smaller unit and boasts sharper graphics, but it’s a little intrusive and creeps above the top of the dashboard. A seven-inch digital instrument panel appears in these cars too, but the fully configurable 10-inch cluster remains an option. Still, it’s a feature the Fiesta doesn’t offer, and to get a digital dashboard on the Polo, you’ll need to tick it on the options list.

In fact, the high level of standard equipment is one of the Clio’s trump cards. All versions come with cruise control with a speed limiter function, automatic folding mirrors, LED headlights and features such as autonomous emergency braking, lane keep assist and traffic sign recognition. Iconic cars add rear parking sensors, and that touchscreen infotainment unit, as well as 16-inch alloy wheels, tinted windows and a leather steering wheel.

Get on the move and one curio sticks out – the gearbox. While most rivals get a six-speed transmission, the Clio TCe 100 uses a five-speed box. Yet the ratio of the final gear seems long enough to ensure that the Clio can cruise quietly on the motorway; at 70mph the engine is turning over at just under 3,000rpm. Noise is well suppressed but that makes wind whistle and road roar more noticeable.

As such, losing a sixth-gear doesn’t seem to have had a detrimental effect. The gearstick sits high on the centre console and falls neatly to hand, but the shift isn’t the sweetest. A Fiesta’s gearbox is more encouraging to sift through, while any of the Volkswagen Group hatchbacks (Polo, SEAT Ibiza and Skoda Fabia) feature a smoother, easier action.

The nose of the Clio is satisfyingly pointy, however, and pairs up nicely with positive steering. The rack is quick and responsive, and it’s easy to build a rapport with the Clio on a good road. It feels planted, but lacks the ultimate sparkle the Fiesta has in this area. It rides very similarly, though, trading a little comfort in favour of good body control. It’s a well-judged thing, given this is a supermini with a reputation for fun. 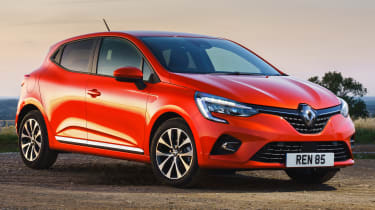 The 0-62mph dash takes 11.8 seconds, so the Clio isn’t fast and a comparable Fiesta EcoBoost manages this sprint over a second quicker. There’s no denying the Polo, the Ibiza and indeed the Skoda feel more mature, but the Renault’s 1.0-litre engine is relatively fuss free and claimed fuel economy is good.

A step above is the 1.3-litre four-cylinder TCe 130 petrol engine, developing 129bhp. We tried it in the new R.S. Line trim model, paired with a seven-speed dual-clutch automatic gearbox, and we found it to be a convincing warm hatch. With a bit more power, the Clio’s chassis and steering set-up make even more sense, and the step up in performance makes a big difference.

More impressive, though, is the step up in quality the cabin takes in this trim level, with the introduction of the larger display, sports seats, drilled pedals and more leather – not to mention the sportier looking exterior bodykit.

The TCe 1.0-litre car in the more desirable R.S. Line trim is priced from £17,795 – more or less exactly the same as the Fiesta 1.0-litre EcoBoost 100 in ST Line guise. Dip into the finance calculators for a two-year deal, and you’ll find the Renault’s monthly payments are cheaper, but that your final balloon payment will be larger.