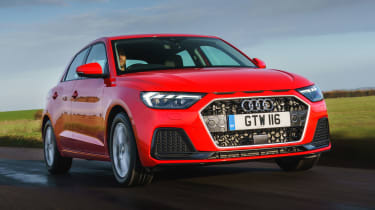 The new Audi A1 raises the bar once again for comfort and refinement therefore cementing its place as a top premium supermini. The cabin is crammed with tech and sets the benchmark for connectivity and functionality, but cheaper rivals have caught up when it comes to interior quality and ambience. A Volkswagen Polo gives you almost as much of everything, for a lot less cash.

When the original Audi A1 launched almost a decade ago, the premium supermini segment was a largely untapped area of the market. Back then the idea of a small car with the interior from an executive saloon was something of a rarity.

But the competition has caught up; today you can spend over £20,000 on a Ford Fiesta. So, is there still space for a supermini with an Audi badge on the bonnet?

This is our first chance to sample the premium hatchback on UK roads and it’s a particularly important test - we praised the car’s ride and refinement when we got behind the wheel in Spain, but the story is often quite different on Britain’s heavily pockmarked tarmac. 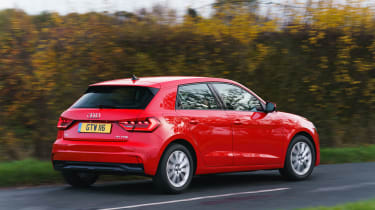 Pleasingly, the A1 still feels like a really grown-up car. Despite its dinky dimensions it handles sweetly and sits comfortably on the motorway – even as an entry-level (for now) 30 TFSI model. Our Sport-spec car gets 16-inch wheels as standard that give a cushioned ride over rougher road.

This compliance doesn’t compromise the way the A1 goes round corners as it steers with accuracy and body control is very good; it isn’t as sharp as a Fiesta or a MINI, but that’s a trade off you’ll have to accept if you want a comparable level of refinement in anything this side of a Mercedes C-Class.

The 114bhp three-cylinder turbo petrol engine packs enough punch, yet rarely feels harsh or thrashy under heavy loads. It isn’t all that fast, but it picks up efficiently and settles down nicely at speed. Working the six-speed manual gearbox is no chore, either. 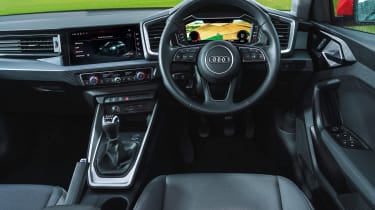 So the driving experience is befitting of the Audi brand – and at first glance, the interior looks to hit the mark, too. All cars get Digital Cockpit (the flashier Virtual Cockpit is optional) dials and an 8.8-inch central touchscreen, placing the A1 right at the top of the class when it comes to interior tech. It’s all easy to operate; anyone who has spent time in a modern Audi will find it intuitive to use, while those stepping out of one of the A1’s rivals should find the systems equally simple to navigate.

Yet it’s also inside where the car’s biggest question marks lie. If you’re paying more (roughly £1,400 like-for-like) than you would for an equivalent Volkswagen Polo, then you expect a noticeable lift in interior quality. But the Audi uses similar-feeling plastics on the doors and scratchy materials on the lower dash, making you question where your extra cash has been spent. But that’s perhaps a compliment to the rest of the class than it is a criticism of the Audi.

The A1 range comprises the familiar SE, Sport and S line trims – all of which feature LED headlights, alloy wheels, air conditioning and that aforementioned digital dashboard. Safety is well catered for, too: Audi Pre-sense is standard, including pedestrian and cyclist detection, hill-hold assist, a speed limiter and lane departure warning.

Sport cars like ours (+£1,470) are expected to account for the majority of UK sales. These include bigger wheels, matt exterior trim, aluminium interior accents and sports seats. Cruise control and rear parking sensors are also included. S line (+£1,650 over Sport) adds racier styling and sports suspension. On top of that you can add S line Style, Contrast or Competition packages, adding even more extra kit. 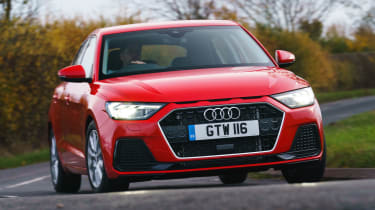 But no matter which version you go for, the A1 remains a relatively spacious supermini. The three-door has been dropped; the only model available is the five-door Sportback, which offers enough room for a pair of adults in the rear. The 335-litre boot is a good size, too, trumping its predecessor by a whopping 65 litres. It’s much bigger and more practical than a MINI 5-door, as well.

The only engine at launch is this 30 TFSI. Audi claims it’ll do 57.6mpg and emit 111g/km of CO2 almost regardless of trim or wheel size. The real exception to this rule is the SE model on its 15-inch wheels; this sits one company car tax band lower thanks to its more favourable emissions.

A cheaper 25 TFSI will join the range in the spring, alongside the more potent 35 and 40 TFSI models. There is no diesel variant planned.