Pedal car for adults: bringing exercise to your commute

Looking for exercises to do in the car? We try a one-off car controlled by bicycle-style pedals 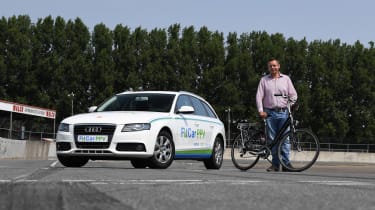 Cars may be a vital form of transport for over a billion people worldwide, but unless you’re a top- flight racing driver they do little to help with physical health. Studies have found a lack of physical exercise kills three million people a year globally, but in the UK we spend over seven hours a day sitting down, with the average UK commuter travelling 54 minutes a day.

So what if commuting could be mixed with exercise? That’s what health-conscious Saudi entrepreneur Nasser Alshawaf asked a Dutch engineering firm.

• How to choose the best pedal car

The result is this adapted Audi A4 Avant. The FitCar PPV, or pedal-powered vehicle, has a normal petrol engine and automatic gearbox, but in place of the accelerator on this prototype is a set of pedals from an under-desk exercise machine. Put simply, the faster you pedal, the faster the car goes, giving you all the benefits of a modern car, but allowing you to exercise.

But while Alshawaf had the idea of combining a car with exercise, it was Oscar Brocades Zaalberg, and his design and engineering firm BPO, who made it a reality.

We’ve come to Holland to try out the PPV, to speak with Brocades Zaalberg and to learn how his team created a vehicle capable of giving drivers their daily workout without requiring a single trip to the gym.

Brocades Zaalberg explains how the project started: “Nasser is a tall, slim guy who is really into sports, and he travels an hour or two to his office, every day, just sitting in a car. He said ‘I want to use commuting time more efficiently, in a way that you exercise’.” 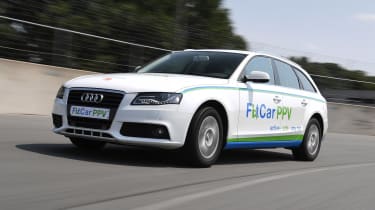 A number of options were considered before Brocades Zaalberg and his team settled on pedals. “We came with a rowing system, a muscle training system,” he says, “but we ended up with pedalling, because it is logical for moving forward.”

The next stage was to make a rough model. “We came first with a mock-up, car seat and a wooden set-up, but it’s hard to predict from that,” Brocades Zaalberg adds. “So we bought a Smart, and integrated it into that, and it was huge fun. It was pretty fast.”

But while the Smart showed it was possible to control acceleration with pedals, space constraints and rough-and ready brakes meant BPO had to think again.

“Not many cars have space to pedal,” says Brocades Zaalberg. “But the A4’s dash is also not too low, and the movements are more relaxing in a car like this.” BPO also had the brakes adapted, so it features the same hand operated braking system as disabled drivers’ cars.

Further issues arose under the skin. “We have to overrule the software; if you pull out the accelerator, the car recognises something is missing,” he says. “Also, the steering wheel was too big, so we had to change it.” And while the FitCar PPV isn’t road legal and the car we’re here to test is very much a prototype, it’s capable of reaching high speeds. “I’ve driven 180km/h with it, and it really was a workout!” Brocades Zaalberg tells us. 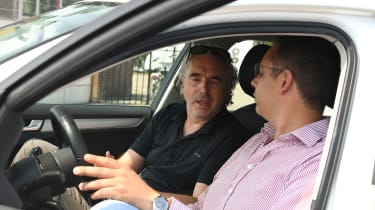 Keen to try the PPV, we climb aboard, and apart from the exercise bike-style pedals, it’s pretty conventional inside. There’s a handle to our right for the brakes and an electronic control box on the central console, but the air-con is blowing cold and the seating position is unchanged from a normal A4. Hand on the brake lever, gearbox into drive and we’re off. The A4 moves forward normally under the auto gearbox’s creep function, but once we start pedalling it accelerates gently.

Despite the unusual arrangement, it soon becomes second nature. We approach a straight on the test track and pedal harder. The car accelerates predictably. There are two sensitivity settings for the complex electronics inside the ‘pedal box’. One is intended for urban driving and means even moderately fast pedalling gives gentle acceleration; the other mode sees even light pedalling result in brisk progress.

Coming up to a corner we stop pedalling, and the car slows as it would if you took your foot off the accelerator. The brakes take more getting used to than the pedals, because anything other than a gentle push of the hand provokes a sharp jolt of deceleration.

But soon it all comes together, and we’re doing about 30mph around the test track, barely thinking about the fact we’re turning pedals rather than pressing them. When we shoot tracking shots later on, our photographer beckons us closer and closer to the camera car to get the perfect shot. We’re able to follow it within about six feet, easily modulating our distance.

While an hour in the PPV hasn’t exactly been a full- scale cardio session, we feel more energised. And to push harder, a dial adjusts the pedals’ resistance.

The FitCar PPV clearly delivers on its promise, so what’s the next step? Brocades Zaalberg explains that decision is ultimately down to Alshawaf, but he sees two main options: “We could go to a car manufacturer and sell the idea and they could integrate it, because it’s patented. Or we can go to an aftermarket company and they will make several options for several cars.” 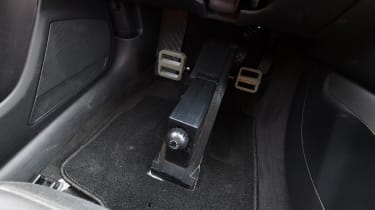 Official integration by a car maker would be the ideal option, Brocades Zaalberg says, partly because packaging could be better managed. On our drive, the toes and heels of our shoes kept brushing the steering column and carpet, for example, and while the PPV is still a concept, this would need to be addressed.

He tells us the pedals would ideally fold away into the transmission tunnel, adding: “If you’re fed up, you can just use the regular brake and accelerator.”

We ask Brocades Zaalberg about getting the PPV road legal. “We would have to pass [regulations]. In Holland it’s called the RDW [the Dutch equivalent of the UK’s Vehicle Certification Agency], but they saw the car and didn’t say there was no way to pass,” he tells us. “But to go through this, that’s up to Nasser.”

Might cost hold it back? “If we can find models this is suitable for that sell in large numbers, economies of scale [apply],” he says. “The hardware isn’t that expensive, and youngsters spend lots on sport.” Whatever the future holds for the FitCar PPV, the idea of exercising as you drive appeals, and it’s certainly one of the more original ideas in motoring.

Enjoyed this motoring piece? Then check out our Peugeot 508 uncovered feature.