Driving a stunt car on camera is the ideal way to learn real-life car control. We find out more on Ford’s Go Faster driving experience 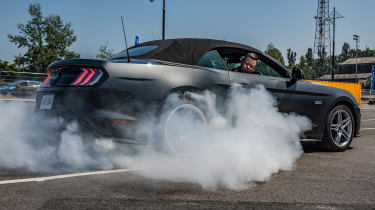 Put your right thumb under the left-hand spoke of the steering wheel. Your elbow should be angled up, towards the A-pillar. Clutch in, select reverse and look out the back window. Let the clutch out and floor the accelerator. Once up to speed take your foot off the gas, press the clutch, then rotate the steering wheel 360 degrees in a single fast movement, reversing this movement as the car performs a 180-degree turn.

Slotting into first gear as the vehicle rotates, let the clutch out and drive off. You have just completed a high-speed J-turn. It goes without saying that you should only attempt such a manoeuvre in appropriate circumstances. That’s why I’ve come to a cordoned-off car park in Manchester, to hone my skills with stunt-driving legend Paul Swift.

Stunt drivers are among the unsung heroes of the film industry. Take any action flick with a car chase, and chances are it’s not the lead actor or actress behind the wheel, but professionals such as Swift who’ve spent years honing their craft. They’re the men and women who make the Fast and Furious franchises so popular with their skills and tricks, and who add to the sex appeal of James Bond and his Aston Martins.

To give punters an idea of the complexity involved in stunt driving, Swift is supervising Ford’s Go Faster experience at Manchester’s Trafford Centre. Now in its fourth year, Go Faster lets members of the public learn how to drift and perform J-turns in a Focus RS, and drive a high-speed route in a Mustang GT – while also trying their hand at some acting, and filming a movie trailer.

It costs from £69 to £125. It’s an immersive experience with actors posing as movie producers and directors, but it puts stunt driving front and centre. I’ve come to get some expert tuition from Swift and his colleagues, and take part in putting together a mock trailer. After executing the J-turn, Swift explains some of his teaching methods.

“With the J-turn we break it down, and dissect that the steering is separate from the power, which is separate from the gears,” he says. “Once you’ve got the A, B, C of it, it’s just refinement.” I’m taught drifting next, and Swift has some words of caution. “The drifting is harder,” he explains to me. “It’s not an A, B, C thing, it’s feel. There’s a fine balance. You’ve got to counter-steer, you’ve got to know when to turn in, and there’s only so much instruction we can give somebody.” 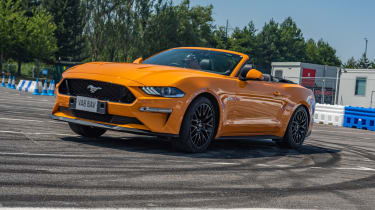 He and I jump in the Focus RS, turn off the traction control and engage Drift mode. Ease off the clutch into first gear, floor the accelerator, full lock on the steering wheel. Once sliding, I keep the power dialled in and steer around a single traffic cone, modulating the throttle and adding in opposite lock as required. Swift seems impressed: “You’ve done this before!” he says with a smile.

So what makes a natural stunt driver? “Two of my guys have got well-known parents who have competed in motorsport,” he explains. Having some heritage in the genetic line clearly helps. Next up is the classic burn-out – a staple with film directors and stunt drivers. As part of the Go Faster experience, I’m treated as if on a real movie set. The cameras are focused on me, while a director yells at me to get the shot perfect.

The one we’re going for is the iconic Steve McQueen burn-out from Bullitt, where he glances out the rear window of his 1968 Mustang GT Fastback with the tyres spitting smoke. While the modern day Mustang GT I’m doing this in has more than enough power to overcome its rear wheels’ traction, Swift instructs me to take the cheat’s route – line lock. Intended, Ford earnestly says, to “warm the tyres when stationary”, this feature applies the front brakes, leaving the rear wheels to spin freely.

With the film crew positioned behind the Mustang, I engage line lock from the track apps, peering out the side window in my best McQueen impression. Smoke fills my field of vision, totally covering the film crew and the photographer. As is always the case with movies, the ‘director’ wants me to repeat the stunt several times to get the perfect shot. 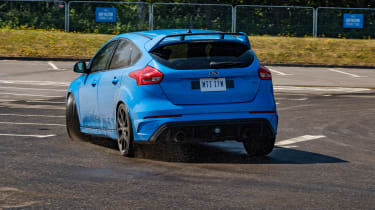 There’s also a sensible, safety-conscious side to the day. Swift firmly believes that learning stunts makes motorists safer drivers. “We’re trying to teach people car control,” he says. “We’re giving them the skills to react if they find themselves in a difficult situation, the confidence to know how to handle a car – and we’re doing it in a safe environment.” So is he always on the lookout for new talent, then After all, he consults on everything from Top Gear to Emmerdale, and has nine drivers working for him on Go Faster alone.

“Two of the guys in the team are 22 and 18, they’ve come through my driving experiences. I’ve always got my eye open. We keep looking out for some talent.” And while I’m not offered any work just yet, Swift does explain what the next steps would be. “Training. I’ve had more practice than anybody else, as I started with my father’s team. Practice is really important,” he says. But he adds: “Having a good coach obviously helps.” And the trickiest stunt drivers are likely to face? “Getting a car on to two wheels is the hardest thing I’ve ever done. That would be the next level up. It took me three months to learn.”

It’s worth pointing out that he accomplished this at the ripe old age of seven... And, of course, stunt driving usually takes place in front of a camera, which makes driving on two wheels even harder. “It’s like patting your head and rubbing your tummy at the same time, trying to gauge the distance between you and the camera.

You’re trying not to get too close to the crew, but they’re still trying to get you in frame.” It’s not only drivers’ skills that need working on, though, but the vehicles used as well. “We’re battling against grip. We’re trying to get the car to do what it’s not supposed to do, which is lose traction and lose grip.” Swift adds that, in fact, modern cars and all their technology make his job harder. 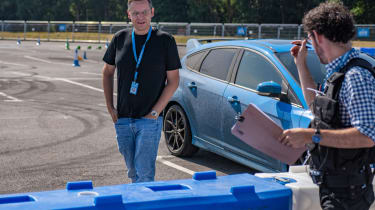 “With ESP and traction control, it’s changing the way we drive,” he says. “We’ve had to become more technical as a team. We have somebody who spends much of their time researching cars and finding their way around it.” Swift tells us his team has to disengage the Focus RS’s anti-lock braking system in order for it to J-turn, for example.

He emphasises, though, that while stunt driving is hard on cars, he doesn’t push them beyond their limits, adding: “We work within the capabilities of the vehicle, so we would never do anything that would over-stretch it. We want to take things to the maximum and then dial it back 10 per cent.” I leave Manchester with a small hope of getting a call from Paul and his team to join an LA-style car chase in the next blockbuster hit – but the call never comes. As they say to all those aspiring to make it in Hollywood: “Don’t quit your day job just yet.”

The J-turn: the key here is hand positioning. Right thumb on the left spoke of the steering wheel, elbow pointing at the A pillar. This allows you to keep track of where the steering wheel should be and turn it in one movement. Changing gears quickly is also important, otherwise you’ll grind to a stop. 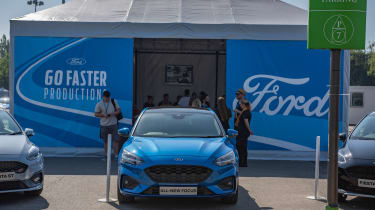 For tips and advice on driving in adverse weather conditions, take a look at the best intensive winter driving courses.