There's been a revolution in the UK's new car market over the past three years. Not only are buyers demanding greater practicality, but image is more important than ever. And that's why the premium estate market has seen a boom. 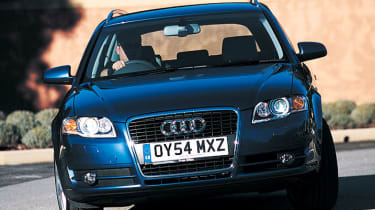 Leaner, more driver-oriented and neatly styled, the Audi A4 Avant has lots to recommend it, including generous trim levels and keen pricing. It is not the most practical compact executive load-lugger on the market, but it is a beautifully built car and one that is guaranteed to hold its value well.

There's been a revolution in the UK's new car market over the past three years. Not only are buyers demanding greater practicality, but image is more important than ever. And that's why the premium estate market has seen a boom.

Fact: Brits buy 50 per cent more luxury load-luggers than we did three years ago. And the growth shows no signs of slowing. This means Audi's latest A4 Avant is a very important model for the German manufacturer.

Unlike the saloon variants, the current Avant outsells the equivalent Mercedes C-Class and BMW 3-Series estates, making it the most popular premium load-lugger on the market. So the revised model has a hard act to follow. Will it enjoy the same success? In styling terms, it definitely maintains its upper hand. As with its predecessor, the A4 looks more compact and leaner than its rivals, and that has always been a big selling point. Along with the saloon, it gets new headlights and tail-lamps, plus the A6-style grille. All of the panels have been reprofiled for a stronger appearance, too. The changes are subtle, but mean the A4 is now ready to take on the challenge of next year's new BMW 3-Series Touring.

Yet smart looks aren't everything in an area of the marketplace where quality and driver appeal are the key to success. Audi realises this, and has made a raft of changes under the skin. There are three new engines: the 2.0 T FSI petrol unit - which we tested in the saloon last week - and a brace of excellent diesels. The two oil-burners are the 138bhp 2.0-litre TDI, as seen in the Volkswagen Golf and Audi A3, and the 273bhp 3.0 powerplant from the A6. Here we drive the 2.0 TDI, which is certain to be the biggest seller in the A4 Avant range when it makes its debut next month.

In terms of refinement, it represents a quantum leap over the old 1.9 TDI PD engine. While it still sounds like a diesel, it is much quieter at idle. It's smoother and less intrusive on the move, too, and turbo lag is kept to a minimum. The standard six-speed manual transmission is pleasant to use; a sequential automatic Multitronic box will join the line-up later in 2005.

As well as fitting the new powerplant, Audi has revised the A4's suspension and steering, and the result is greater stiffness and better body control through corners. Yet the ride doesn't suffer - if anything, it's better than on the outgoing A4, and soaks up uneven surfaces well.

The greatest criticism levelled at the old A4 was its detached steering feel, and a revised rack and dampers have gone some way to addressing the problem. The set-up is still nowhere near that of, say, a BMW 3-Series for agility, but there is better feedback and the wheel is well weighted at speed.

All of which makes the A4 Avant a highly attractive package, and one that looks set to continue Audi's impressive sales figures in the estate market. We question the car's practicality, though, for while it might be more useful than its saloon stablemate, the luggage area is nowhere near as spacious or as versatile as those of some of its competitors.

The seat back tilts forward in two sections, but does not fold fully flat, while the removable tonneau cover is heavy and cumbersome to take off. In an estate car, these are things which will irritate those owners who want such a vehicle to work for a living.