The all-new Audi A4 saloon hits UK showrooms in March – but we've already driven it! 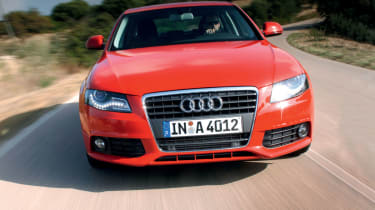 As its evolutionary styling suggests, the A4 isn’t a massive leap forward in terms of design. Yet in every respect, the latest-generation car represents an improvement over the outgoing model. Bigger, more stylish and with a choice of decent petrol and diesel engines, it looks set to be a surefire hit. Thanks to its desirable image, high-quality cabin and what Audi anticipates will be class-leading residual values, this latest compact executive model will provide even stiffer competition to the likes of Mercedes and BMW.

Is it going to be a hat-trick for Audi? Following hot on the heels of the stunning R8 supercar and smart A5 coupé, the new A4 hits the UK in March. But will it be good enough to beat BMW’s 3-Series and the latest Mercedes C-Class?

The saloon shares underpinnings with the A5, and its trademark grille is flanked by flush-fitting headlamps inspired by the coupé’s. Smart details include slimline side indicator repeat­ers in the door mirrors and intricately detailed light clusters all-round.

The string of distinctive LED day­time running lamps on our car make a real impression on other road users, although they don’t come as part of the standard package. If you want them, you’ll have to pay £775 for the optional Xenon headlight kit.

And the A4 has grown. The new model is 117mm longer and 55mm wider than its predecessor, while the wheelbase has increased by 160mm to improve weight distribution.

As with the outside, the interior is a lesson in understated luxury. Its classy materials, logical layout and solid build quality more than match those of riv­als. Our mid-range SE car comes with three-zone air-con, a leather-rimmed multi­function steering wheel and alu­minium detailing as standard.

Audi’s wonderfully intuitive MMI interface, which operates all the car’s major set­tings, features in the A4 for the first time. Its combination of col­our screen, rotary control and separate buttons makes other manufacturers’ systems seem needlessly complicated.

There’s plenty of legroom in the back, while the boot has a spacious 480-litre capacity. And by folding the rear seats, you can boost the load vol­ume to an impressive 962 litres.

Three petrol engines will be avail­able when the model is launched next year: a pair of 1.8-litre turbos and a 3.2-litre V6. Diesel options include 2.0, 2.7 and 3.0-litre TDI power­plants, but we tried the mid-range petrol – the 1.8-litre turbo delivers 158bhp.

It provides decent pace and covers 0-62mph in 8.6 seconds. That tells only half of the story, though, as this model’s greatest asset is the linear power delivery. Peak torque of 250Nm comes in from as low as 1,500rpm, while fuel economy of 39.8mpg and CO2 emissions of 169g/km are com­petitive. Only the uninspiring engine note lets the side down.

Yet even that is hushed at cruising speeds, where the supple suspension does a fine job of absorbing bumps. On twisty routes, the A4 maintains its composure with good body control and tidy handling. Its precise steering helps, even if the manual gearchange can become notchy if you rush the lever. Further up the spec range, buy­ers get an array of hi-tech gizmos. With Audi Drive Select, the steering, engine and suspension settings can be adjusted at the touch of a button. Dynamic Steering alters the bias to improve stability, aid agility and even help apply corrective steering inputs.

Final UK specifications have yet to be confirmed but, even without such gadgetry, the new A4 is a solid and keenly priced compact executive car.