Is the German firm's flagship A4 diesel strong enough to take on the BMW 3-Series? We find out. 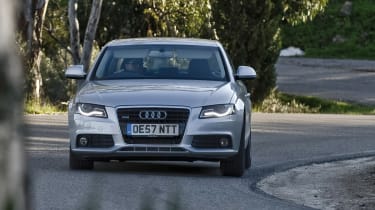 It’s difficult to find fault with the A4. Audi has paid attention to key areas in this market – comfort and refinement are class-leading, and it has more interior space than its rivals, too. The flagship diesel is sublime, with superb in-gear pull, while the quattro system offers excellent grip. Put simply, the A4 is now a serious contender for BMW’s crown.

Only 10 years ago, Audi’s UK range consisted of 12 models. Today, its line-up is 25-strong and includes a super­car, while a new supermini will soon boost those numbers even further.

In spite of these signs of soaring growth, it’s the A4 compact executive that remains at the core of the firm’s operations – and as the new version hits UK roads this week, we drove it first to deliver our verdict.

We have already been impressed by the 1.8T FSI and 2.0 TDI variants in left-hand-drive form. Now, it’s the turn of the top-spec 3.0-litre diesel to be put through its paces. And with 237bhp and 500Nm of torque, it’s a strong performer – a 0-60mph time of 6.1 seconds means acceleration is nearly as fast as a Porsche Cayman.

But it’s the smooth nature of the V6 powerplant that really stands out, along with the effortless way it performs. Maximum torque is available from 1,500rpm and there’s virtually no turbo lag, so the A4 feels tractable from low speeds. As you’d expect, in-gear acceleration is good, too.

Our model was equipped with the optional Audi Driver Select (ADS) system, which enables you to optimise the power-steering assistance, adjust the dampers and sharpen throttle res­ponse according to road conditions.

There are three packages depending on which engine you opt for, but we tried the full set-up. Comfort, Dyn­amic and Auto presets are included, while Individual mode allows you to save your own settings.

Grip In everyday situations, Auto is the best option. However, engage the Dynamic mode, and the A4 proves a real thriller. Thanks to its quattro four-wheel drive, grip is superb. Body control is equally impressive and the Audi is happy to be thrown hard into bends.

It’s not quite as engaging as the BMW 3-Series, yet it’s still competent, while the 4WD gives the A4 an advantage on slippery roads. The quattro system is currently available with a six-speed gearbox, but a revised Tiptronic auto will appear this year. Audi also offers technology usually found in the class above, such as lane assist, a reversing camera, electric handbrake and blind spot warning system.

Add all these features to the great engine and strong dynamics, and the flagship A4 diesel is a great package.

Rival: BMW 330d SE The 3-Series is the benchmark in the class, and is the car Audi is aiming for. Both offer similar power outputs, kit and prices. The BMW has a narrow edge on driver involvement, but it can’t match the A4’s space and comfort.