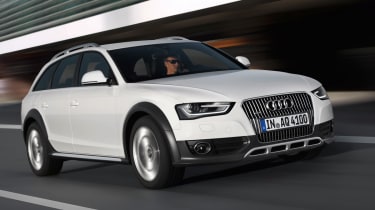 The Audi A4 Allroad boasts a long list of talents, but it has never been the cheapest car to run or the nicest to look at. The facelift addresses those issues and improves the way the Allroad drives. For some it will be the perfect mix of off-road ability and on-road performance, but the high price tag will no doubt put a lot of buyers off.

The Allroad is the quirkiest member of the A4 family, and Audi has just improved the way it looks and drives. Will that be enough to shrug off competition from proper SUVs such as Audi’s own Q5?
Redesigned headlights and tail-lamps help to mark out the newcomer, but the changes to the Allroad are less pronounced than elsewhere in the A4 range
– it doesn’t get the tweaked lower bumper or stretched foglights seen on the regular saloon or Avant.
All the interior updates arecarried over, though, including simplified controls for the stereo and some classy gloss black trim.
Our test car was the flagship 3.0-litre V6 TDI quattro, which can do 0-62mph in 6.2 seconds. That’s no quicker than before, but the big benefits are at the pumps.
Previously, this engine emitted 189g/km and returned claimed fuel economy of 39.8mpg, but Audi has improved these figures to 161g/km and 45.6mpg.
Suspension tweaks help it soak up bumps easily, but the set-up is firm. It doesn’t roll much, yet can’t match a standard A4 for comfort and agility due to the raised ride height.
With strong pace, a classy cabin and decent off-road ability, this Allroad 3.0 TDI is a fine car. But the £36,840 price buys a Q5 with the same engine.
Share this on TwitterShare this on FacebookEmail