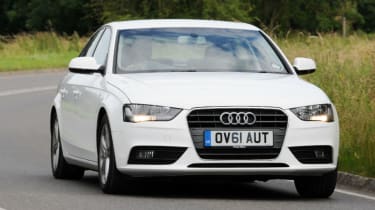 The BMW 320d ED remains the driver’s choice in the compact executive class. However, in the SE trim tested here the Audi A4 is cheaper, every bit as desirable and almost as fast in the real world. It delivers smooth and refined performance, and remains an appealing choice for corporate buyers in this competitive sector.

When it comes to efficiency the Audi A4 has played second fiddle to the BMW 3 Series for years, but this facelifted TDIe model is aiming to closing that gap. It’s also destined to be the best-selling version of the A4, and we’re testing it here in affordable SE trim.

Unlike the sporty S line model, this SE does without the striking LED running lights or bolstered side skirts but it still looks fresh thanks to some subtle styling tweaks. The trademark grille is now tapered at the top, while the front bumper and angular headlights have both been reshaped for 2012.

The beautifully crafted interior has been carried over largely unchanged. However some updated trim finishes and an equipment list that includes a powerful sound system, rear parking sensors, cruise control and Bluetooth ensure that the A4 is just as desirable as its premium rivals.

For an additional £1,100, any 2.0-litre diesel model can be upgraded to become an SE Tecknik, which comes with a full leather interior, sat-nav and an iPod port. And even with this high spec, the A4 is still £435 cheaper than the entry-level BMW 320d EfficientDynamics.

But is it as good to drive as the class leader? Well, the revised A4 features updated suspension and electromechanical power steering, both of which help lower its C02 emissions from 119g/km to 112g/km. However despite being comfortable and very refined on the motorway and offering a decent amount of body control and grip in corners, the Audi lacks in the way of driver involvement.

The new steering rack provides very little feedback and while the ride is composed at lower speeds, bumps and potholes send jarring shocks through the cabin. Still, the A4 is spacious and practical and with claimed economy of 65.7mpg should be very cheap to run, too.