Exclusive pictures and details of the new Audi A4, due for release in early 2015 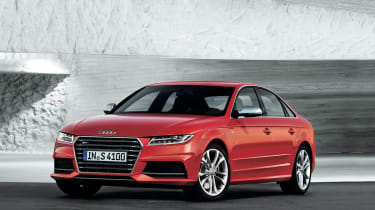 The new Audi A4 2014, as we previously thought of it, will in fact go on sale in early 2015, with a reveal at some point later this year.

• We've driven the new Audi A4 - read the review here

Our exclusive images in the gallery above show the expensive and powerful Audi S4 model, but expect to see the bold new design for every model in the new A4 range. This new, updated Audi A4 will see the saloon and Avant estate getting an overhaul, but also the A5 Coupe, Cabriolet and five-door Sportback.

The next Audi A4 is likely to be revealed at the Paris Motor Show 2014, ahead of a launch at the start of 2015. As for the price, the new Audi A4 will probably cost around the same as the current model, which starts from £23,960, though there could be a small increase on account of the new equipment included.

New Audi A4 specs and technology

The main focus of the new Audi A4 will be on lightness and efficiency, with the new model being more economical than the current A4 but also a better driver's car. With the BMW 3 Series leading the market for drive enjoyment, this new model is Audi's chance to take that crown.

Alexander Pesch, head of technical project management for Audi, told us: “The next A4 will move the game on. The jump from today’s car in terms of design and efficiency will be really big.”

Smaller headlights and large air intakes will sit either side of a new grille design. The Crosslane Coupe Concept shown at the 2012 Paris Motor Show gave us a glimpse of how the new Audi front end will look and we expect the new A4 to be a toned-down version of that.

The new Audi A4 will have similar proportions to the current model, with sharp bodywork creases and distinctive LED lights not he front and back. A weight saving of around 100kg will mean the new A4 handles better and is more efficient, and is possible because the car will be based on the VW Group’s advanced MLB platform (bigger brother of the MQB set-up used by the A3 and VW Golf). This new architecture will underpin everything from the A4 to the new VW Touareg in 2016.

As with MQB, MLB will be made from strong hot-formed steels, allowing thinner chassis components to be used – and it reduces weight dramatically. A variety of materials can be used as well, so high-spec models could use aluminium or carbon fibre to cut weight further.

There will be big steps forward in hybrid tech, with two petrol-electric A4s likely. First up is a development of the A3 e-tron’s front-wheel-drive plug-in system, teaming a 2.0-litre petrol engine with an electric motor integrated into the DSG box.

The other hybrid is a more potent e-quattro system, with a petrol engine up front and two powerful electric motors on the rear axle, giving a different take on Audi’s trademark quattro 4WD.

The S4 will feature a reworked version of the current turbo V6, with around 350bhp, while the flagship RS4 Avant could ditch its 4.2-litre V8 in favour of a smaller turbo 3.0-litre V6 offering almost 500bhp. Alternatively, the 4.0-litre V8 that's used in the RS6 and RS7 models could be detuned for use in the RS4.

More powerful but less thirsty 1.8 TFSI and 2.0 TFSI petrol engines, plus 2.0 TDI diesels, will again make up the lion’s share of sales and many of the petrol engines will feature cylinder deactivation tech to boost fuel economy.

And the A4 saloon is just the start of the new family. Between 2014 and 2016, it’ll be joined by an A4 Avant, plus an A5 Coupe, Cabriolet and Sportback, using the same engines and underpinnings. 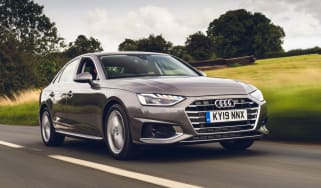