The new Audi A6 starred with petrol V6 power, but is it just as good with a four-cylinder diesel? 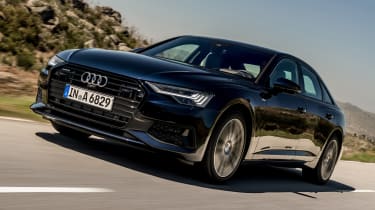 The new Audi A6 represents a big step forwards over its predecessor in every specification, but none more so than in 40 TDI guise. Audi’s latest exec looks good, drives well, and is bigger and better equipped than before. This entry-level TDI engine is also impressively economical, decently refined and the sweetest version in the new range to drive.

We already know how good the new Audi A6 is. It’s based on the bigger but mightily impressive new A7, yet it sheds a little weight and adds a fair chunk of design appeal over the car it replaces. Having already driven it in 55 TFSI specification, we know it drives as good as it looks, too.

You might think that by going for the least powerful engine option, a new four-cylinder, 2.0-litre TDI with just 201bhp, the new A6 will lose some of its draw. Not so. Quite the opposite, in fact. You do sacrifice a bit of outright performance by downsizing, but you also lose a fair bit of weight – and you can detect the extra agility right from the off.

The suspension loses some of its digitisation, while the steering is less complex; the 40 TDI does without Audi’s new electric four-wheel-steering system and the dynamic assistance set-up that appears on the bigger-engined models. 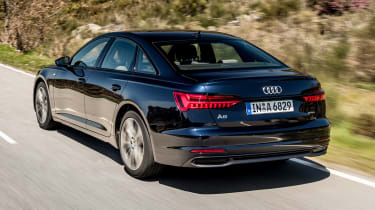 To be honest, the new model feels all the better for it, and the drop in performance is nowhere near as obvious as you might think. The car feels sprightly on the road, with refined and decent acceleration on offer from anything above 2,000rpm. This is followed by a surprisingly strong and lasting pull in the mid-range.

Even its seven-speed auto box shifts as quickly and as smoothly as the V6 car’s; the 40 TDI certainly doesn’t feel slow relative to the more potent A6s.

On the move, it feels more pure in its responses and more natural to drive, simply because there is less electronic assistance. Basic A6s will be front-wheel drive, but our car came fitted with Audi’s quattro set-up. It certainly steered more sweetly than the ‘dynamically assisted’ V6 models, with enough grip and composure to take the fight to a BMW 5 Series. It’s close enough for it no longer to be a foregone conclusion in favour of the BMW, which has long been the dynamic benchmark in this class.

Plus, of course, it will be more economical than any other new A6. We’re still waiting on official WLTP emissions data, but it’s safe to assume this 40 TDI – with its 12-volt electrical assistance – will return more than 50mpg in day-to-day running. With a 63-litre fuel tank, the 40 TDI should have an impressive real-world range. 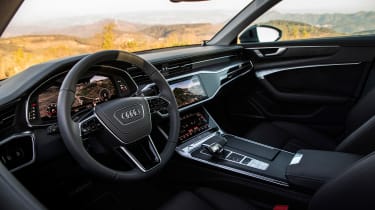 The perceived build quality of the cabin is hard to fault and there’s a stylish new design for the dash and centre console. Up front, it feels much like the brand’s flagship A8, with a set of fully digital dials and two further touchscreens on the centre stack.

Space in the rear of the A6 is better in all dimensions than before, with 17mm more legroom and around 10mm more headroom, making the A6 the roomiest car in its class, claims Audi. It’s hard not to concur; it feels genuinely luxuriant in the back. The boot is also competitive, although not class leading, with the space compromised slightly by the mild-hybrid system’s 12V batteries.