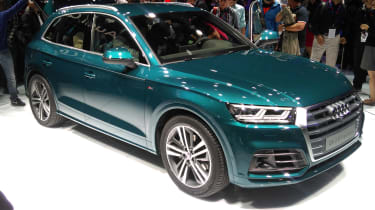 The new Audi Q5 is now on sale following its debut at the 2016 Paris Motor Show, priced from £37,170. Audi’s new mid-sized SUV takes clear inspiration from the larger Q7 and the refreshed look makes full use of Audi’s latest design language, with design cues such as the new, large, angular grille front an centre, flanked by new LED headlights.

It’s a more upmarket and refined car than the outgoing model to rival newer models like the Mercedes GLC plus an all-new BMW X3 due later this year. That’s why the new Q5 takes after the larger Q7, rather than taking on the unique styling of its smaller Q2 sibling.

The second-generation Q5 uses the VW Group’s MLB platform. This is, in effect, the same mechanical make-up of chassis, engines and technology that is used in the already popular MQB set-up, but based around longitudinal engines instead of motors mounted transversely. It’s the same platform that underpins the latest A4, and means the new Q5 is up to 90kg lighter than the model it replaces. This should ensure sharper handling and improved comfort, while air-suspension will be offered as an option.

That will help the SUV’s efficiency, while Audi will also introduce front-wheel-drive to the range for the first time. At launch, the Q5 range will be four-wheel-drive, but the latest version of the quattro system disconnects the rear wheels during everyday driving to save fuel (as in the new A4 Allroad).

Initially there will be five engines available: a 249bhp TFSI petrol, a 2.0 TDI diesel with 148bhp, 161bhp or 187bhp, and a 3.0 TDI with 282bhp. Six-speed manual and seven speed S tronic gearboxes will be offered with the 2.0-litre engines, while the 3.0 TDI has an eight-speed Tiptronic box.

On top of the regular range, we’ll be getting a hot SQ5 model too. Audi revealed the new hot SUV at the recent Detroit Motor Show, confirming a turbocharged 3.0-litre V6 with 349bhp, a 5.4 second 0-62mph time, and availability in Europe from mid 2017. An RS Q5 will wade in later in 2017 with at least 450bhp from a twin-turbo petrol.

There will also be an ultra-efficient plug-in hybrid version, mixing turbo petrol power with two electric motors for CO2 emissions of less than 90g/km. 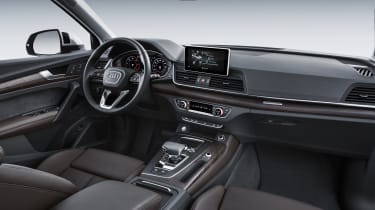 Some of the biggest changes are made inside, where the Q5 gets an overhaul that brings improved materials, a wider range of finishes to allow greater scope for personalisation, and – thanks to a longer wheelbase – improved knee and legroom for rear occupants.

Welcome to our Paris Motor Show hub page. Scroll down for all our Paris content...
Best new cars coming in 2021

From electric cars to supercars, this is our list of the best new cars coming in 2021
Facelifted Audi SQ5 TDI on sale in the UK now from £56,600 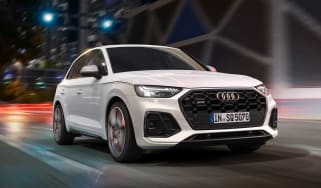