The hottest car of the year, the Audi R8 isn't perfect, but driving it is such a thrilling experience, you won't care 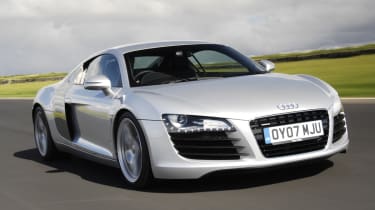 Drive an R8 and you’ll learn what it’s like to be a celebrity. On public roads, crowds followed us. And when we stopped, cameras clicked. Right now, the R8 is the hottest sports car in the world.

As a runner-up finish here proves, it’s one of the best, too. But it’s not only about the driving. Of the 20 models we tested, only the Lamborghini – which costs twice as much – managed to better the R8’s sense of occasion.

Although those side blades break up the flow of the flanks, when combined with the LED headlights and the glass panel – which provides a window on to the V8 engine – they ensure people stop to look.

Open one of the wide doors and another treat awaits: the adventurous, low-slung cabin. The switchgear is familiar Audi fare, but the angled windscreen, cosseting seats and swooping layout set the interior apart from that of a TT. The best detail by far, however, is the open-gate gearlever. As beautiful to use as it is to look at, it’s light and precise, and shifts are accompanied by a metallic ‘clack-clack’.

The rest of the car follows this philosophy: it appears intimidating, but is actually as light and easy to drive as the Mazda MX-5. Being so accessible and unflappable makes the R8 less challenging than some cars here, so ultimately it isn’t as rewarding. But that’s when it’s being driven on a track...

As a road car, however, the mid-engined machine is near-flawless. The gorgeous gearbox hints that this Audi has personality as well as presence and, on the roads of North Wales, the R8 did nothing to dispel that notion. The 4.2-litre V8 proved more tuneful than the guttural flat-six in the Porsche 911, and nearly as loud. It’s great fun to drive at any speed, and the Magnetic Ride dampers (a £1,350 option) are simply one of the discoveries of the year – the ride is absolutely brilliant.

At the track, the R8 delivered another surprise. The quattro 4WD has been set up to make the car behave more like a rear-wheel-drive vehicle, and will power oversteer if provoked – no other Audi will let you do that. The brakes were immensely strong, but the few flaws we had detected on the road were thrown into sharp focus on the circuit. There’s a hesitation in the engine response above 3,000rpm and, because the chassis is so pin-sharp, the slightly numb feedback through the steering wheel becomes more noticeable.

Audi appears deliberately to have made the rack slower in order to enhance stability, but the result is that it lacks the tactile nature and precision of our winner. However, it’s still an outstanding machine.