The latest F1-inspired Renaultsport Megane has learnt from previous models' failings, and is now a brilliant all-round package 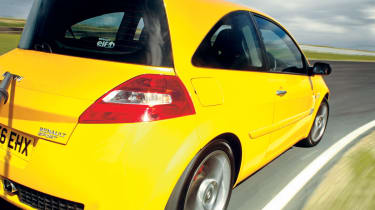 This isn’t the first time a hot Mégane has appeared in Greatest Drives. In 2004, a 225 RS finished 23rd out of 25. We said at the time: “The Mégane RS misses not only the bullseye, but the whole target. Let’s hope Renault gets the message.”

It did and, three years later, the Mégane R26 was the biggest surprise of Greatest Drives 2007. Renault stripped down the car and started again with the suspension, engine and even the front sub-frame. Latest on the list of additions is a limited-slip differential.

It was this piece of hardware that really sold us on the car. Every other hot hatch, even the Clio and Honda Civic, spun an inside wheel when exiting sharp bends, which meant they lost power, speed, traction and slipped off line. Not the Mégane. The diff pulled it through Anglesey’s tight corners efficiently, while the potent turbocharged engine made mincemeat of the straights. No one was surprised when the Mégane posted the fastest hot hatch lap – at 68.2 seconds, quicker than the Caterham and BMW 130i, and only a few fractions behind the VXR8.

As front-wheel-drive hatches generally struggle to cope with spiralling power outputs, it’s great to see a company finding an engineering solution to the problem, especially as the R26 works equally well on the road. There’s not too much torque steer or pull through the steering wheel, and the suspension soaks up punishment.

Gaudy decals aside, it even looks good. However, on our car, the slack gearchange eventually gave up the ghost, and while the Recaro seats are superb, the cabin doesn’t convey any sense of excitement. Under the skin, though, the Mégane is a hot hatch transformed. Well done, Renault.