Now a more mature drive, the latest MINI is slightly less fun than previous Cooper models - which is why it's outside the top 10 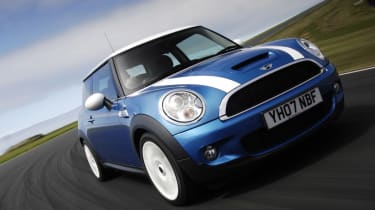 Ever since the original Mini first arrived in 1959, driving fun has been a key part of the legend. And BMW did well to instil the same ingredients into the new version at its launch in 2001.

As a result, MINIs have always featured strongly at Greatest Drives – a Cooper S Works won outright in 2003. But now there’s an all-new Cooper S: turbocharged rather than supercharged, and claiming to be better than ever to drive. So why does it finish in 11th position?

Well, the MINI has grown up and, despite BMW’s best efforts, it no longer has the same carefree zest for life. It’s undoubtedly better than ever to own, and arguably more competent in corners. With a more compliant ride, though, it’s lost the go-kart dynamics that brought the supercharged car so many fans. The Cooper S is slightly less addictive to drive, but the steering is beautifully weighted and communicative, while great body control and high-speed balance bring a smile.

The engine is perhaps the star of the show: it’s tractable, punchy and eager with no lag. And the gearshift is just as impressive.

On the test track, the MINI can’t match the precision of the Honda Civic Type R or Renaultsport Clio R27 while, with the stability control switched off, the lack of a limited-slip differential affects traction coming out of tight corners.

The £115 optional differential would boost mechanical grip and may have given a slightly higher placing, but lap times are not at the heart of the MINI’s appeal.

Nevertheless, a Works version is known to be in the pipeline and is expected some time next year. Roll on Greatest Drives 2008!