Although it's the baby of the BMW range, it bears the M Sport pack, giving it a formidable 261bhp 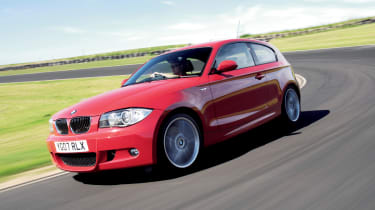 Here’s a rarity for Greatest Drives – a BMW that’s not an M car. In truth, the 130i is not far off. With a 3.0-litre engine and 261bhp on tap, it’s definitely got the performance credentials. Add an M Sport package, including 18-inch alloy wheels, sports seats and matching steering wheel, plus aggressive body mouldings, and it’s practically there.

It looks impressive from the outside, with a purposeful nose and long bonnet, but the cabin is a bit disappointing. While the quality is excellent, the layout isn’t all that pleasing or attractive. It is rather plain, and a long way from what we’d consider sporting.

Press the start button and the naturally aspirated straight-six engine fires into life with a deep growl. On the move, though, it’s clear the 130i doesn’t like low speeds. A heavy clutch and gearbox, plus a sensitive throttle, make the car hard work in traffic – but that’s of little consequence here. On open roads, it picks up well, responds precisely to throttle inputs and sounds superb.

It’s a pity, then, that the stiff suspension and damping cause the 130i to be fidgety on rough roads. The car bounces and skips where other hot hatches, including the MINI, are better controlled.

On the circuit’s smooth tarmac, the rear-wheel-drive layout helped the BMW shine – but it tended to weave disconcertingly under heavy braking. There was also a fair amount of body movement through corners, and the 130i lacked the agility of the best hot hatches.

Still, it was surprising to see the 1-Series so low down the pecking order – proof that this year’s Greatest Drives crop has no real bad apples.