It's the top-selling two-seater of all time, but does the Mazda MX-5 still have the flair to challenge for the title of Greatest Drive? 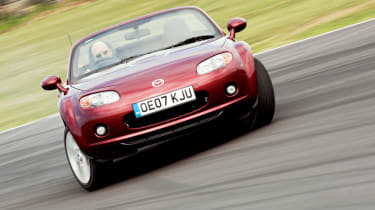 Here's a real record breaker. The MX-5 is in the Guinness Book of Records as the best-selling two-seater sports car of all-time. It’s also appeared in Greatest Drives several times in various forms.

It earns a place this year in roadster coupé guise – hence the RC badge. The powered folding lid adds 37kg to the kerbweight, and the larger gap for accommodating it has led to some chassis stiffness being lost. So reinforcing brackets have been fitted, as has a bigger front stabiliser bar and stiffer suspension. Yet the MX-5 has slipped four places since last year. Is the roof to blame?

Not at all. The hard-top car is as balanced, agile and entertaining as the cabrio. But there are no headline-grabbing power or performance figures – the 2.0-litre engine’s 158bhp output is modest, it sounds pretty flat and our 0-60mph time of 7.1 seconds puts it behind all the hot hatches. Instead, what’s great about the little Mazda is its ability to entertain at any speed.

Many roadsters rely on you putting the roof down for real enjoyment, and the MX-5 is at its best in that state. However, its sense of fun is always there, even in the middle of winter.

This has to be one of the best cars in which to learn about driving. As with the Honda Civic Type R, it has a near-perfect blend of power, handling and balance, while the sharp steering and rear-wheel drive keep enthusiasts amused. Take it to the test track, turn off the traction control and it becomes playful.

Thanks to the lofty ride height, there is a hint of dead travel in the suspension, and steering response isn’t perfectly linear. But those are minor gripes – the MX-5 is still a joy.