The estate version of the BMW M5 is no slouch, but it doesn't feel as special as previous M cars from BMW 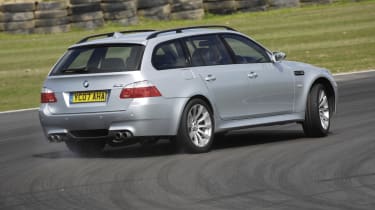 This year’s Greatest Drives won’t make particularly pleasant reading for BMW fans. Both of the firm’s entries are in the bottom five.

Is the blue propeller losing its touch? The latest M3 hasn’t had the easiest ride, being beaten by Audi’s RS4 in our recent twin test (Issue 969). But that doesn’t explain why the M5, which finished eighth in Greatest Drives as a saloon two years ago, is now in 16th place.

It’s partly due to the appearance of so many talented new rivals – and also because it doesn’t quite work as an estate. Where hot Audi load-luggers are brilliant all-rounders, the BMW has two distinct personalities: practical family hauler or hardcore super-saloon.

That there are so many modes and settings for everything doesn’t help, yet you can’t deny this model has plenty of urge. There’s 507bhp available once you’ve pressed the Power button, which also sharpens throttle response.

At nearly two tonnes, the BMW is the heaviest car here after the Mercedes CL63. In a straight line, though, it’s a match for Audi’s R8. Acceleration is ferocious, equalled only by the savagery of the sequential box in the fastest of its 11 modes.

However, the point at which this car becomes involving is at speeds which aren’t practical on UK roads. It’s almost too well engineered and doesn’t provide enough low-speed excitement. The sheer complexity of the M5 does it few favours, but it is still special, offering fine grip and a well balanced chassis.

At the track, it was great – playful and surprisingly agile, with meaty steering – although it would bite back if mistreated. However, it lacks the magic that some of the cheaper cars here serve up so ably.