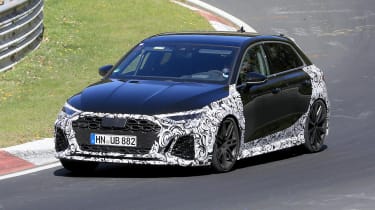 Work on the new Audi RS 3 is nearing completion, and now sales and marketing boss of Audi Sport has revealed to Auto Express that fans can “rely” on the company’s engineers to deliver with the Mk3 version of the car.

Speaking exclusively with us, Audi Sport Sales and Marketing head Frank Michl called the RS 3 “one of the success stories of the brand” across two generations thanks mainly to its five-cylinder powertrain, in a hint that Audi would not look to downsize with the next version.

“I think it’s [the RS 3] one of the most emotional Audi Sport cars and is a major part of the brand’s DNA, even going back to the original quattro. You can be sure that for every future RS model we will always take forward the good aspects and characteristics.”

Michl didn’t give any specific details away, however, and said that it would be “some months” until the new car is revealed, but declined to confirm if the upcoming Mercedes-AMG A45 fighter would be on roads in 2020.

While Audi bosses are now beginning to speak in earnest about the project, the new RS 3 has been spied numerous times in the hands of engineers at the Nurburgring, indicating that the new 400bhp+ super-hatch is in the final stages of assessment. Here’s everything we know so far.

The test car spied in the latest images wear less camouflage than previous mules, though several of the key areas of design are still hidden. However, what’s clear to see is that, true to previous RS-branded Audis, the new RS 3 will feature a purposeful bodykit to set it apart from the lesser versions of the A3. 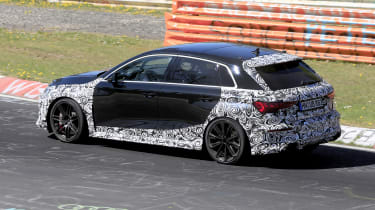 The upgrades at the front include a deeper front bumper with enlarged air dams to provide more cool air for the engine. Hot air will be expelled with help of additional vents on the trailing edge of the front wheel arches. The side sills are deeper than regular A3 models, while around the back there’s a larger rear spoiler, an extended rear diffuser and the RS-trademark oversized pair of oval tailpipes.

The makeover will continue inside, with a pair of heavily bolstered sports seats, a sports steering wheel, aluminium pedals and a range of RS-specific displays for the car’s 10.1-inch infotainment system and ‘Virtual Cockpit’ digital instrument binnacle.

Like the eighth-generation Golf, the new Audi RS 3 will be based on the latest version of Volkswagen Group’s MQB underpinnings, albeit with a number of performance upgrades. Current testing mules sport chassis upgrades like lowered suspension and drilled brake discs with larger calipers – all of which should find their way onto the production model.

As the new RS 3 will be based on the same platform as the outgoing model, Audi should also retain the current car’s turbocharged 2.5-litre five-cylinder petrol engine – which is still used in the latest Audi RS Q3. However, the unit’s power and torque figures will increase to around 415bhp and 500Nm (over the engine’s standard output of 395bhp and 480Nm), in an effort to keep the RS 3 competitive with the 415bhp Mercedes-AMG A 45 S.

Power will be sent through a dual-clutch automatic transmission to a quattro all-wheel-drive system. Like the outgoing model, the new RS 3’s chassis and drivetrain will be supported by a number of technologies reserved for the RS badged model, including adjustable dampers, a torque vectoring system and an adaptive electronic power steering setup, all with a unique tune.

Though a reveal has not yet taken place, the next RS 3 will likely start from around £50,000 with sales commencing in 2021. This would also make the RS 3 around £11,000 more expensive than its upcoming mid-range underling, the Audi S3, which will likely cost from around £39,000 when it hits showrooms with four-cylinder power and 306bhp.

What do you make of the new Audi RS 3? Let us know in the comments section below... 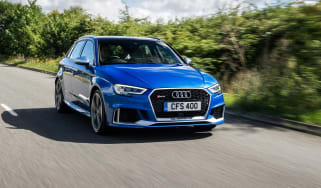 The next Honda Civic Type R will grow in size, but it won’t use a hybrid powertrain. Our exclusive image previews how it could look
New Hyundai i30 N 2020 review